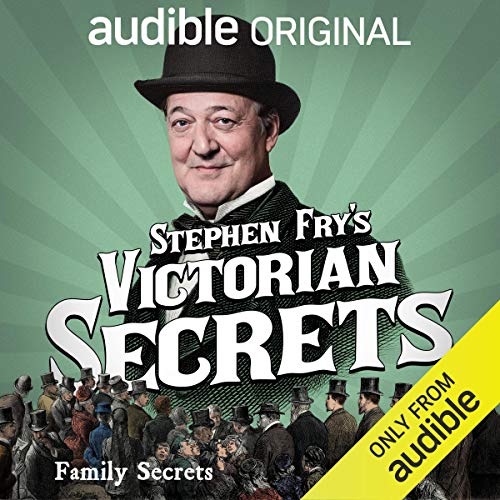 Try for £0.00
One credit a month, good for any title to download and keep.
Unlimited listening to the Plus Catalogue - thousands of select Audible Originals, podcasts and audiobooks.
Exclusive member-only deals.
£7.99 a month after 30 days. Cancel anytime.

Of course, all families, high born and low have secrets. Confidential conditions of mind or body. Black sheep. Skeletons in cupboards. Unmentionable uncles. Naughty nephews... aunties who aren't... conventional. More often than not it boils down to something - sexual.

This episode is about the keeping and uncovering of family secrets. In a way it unlocks all the secrets in all our episodes.

Many Victorians, especially the more successful ones, feared shame. In a way this fear was something quite new. A new and growing newspaper industry was keen to amplify that shame. And a new middle class, desperate to cling to its new-found monied status, felt threatened. And, new theories about heredity, coming later in the century, meant that (perish the thought!) shamefulness could be passed on – like red hair or big feet - from generation to generation.

I enjoyed this series but I couldn’t listen to it too often because of the dreadfully loud, repetitive and intrusive music playing almost constantly in the background. It really detracted from my enjoyment of the piece. The music was good but there was just far too much of it, it was far too loud and it went on and on and on...

I managed 30 minutes, dreadful and totally inappropriate music. Are all of Fry’s Audible books like this? I was going to try Sherlock Holmes but am now not so keen if there is music.

Let down by intrusive sound effects

This goes for all of the episodes which I've listened to so far (1-4).

Mr Fry is (as always) superb. I don't think the man is capable of a bad performance.

The stories are generally interesting and linked together quite well.

Where the production fails - and the reason for my 3 stars - is the intrusive and unecessary sound effects. A wailing baby in the first title (from the first moment) to similarly unwarrented intrusions in the other episodes. It totally spoils what is otherwise an excellent series.

If they had someone remove those effects, it'd be a definite five stars. As it is, you have to wade your way through this nonsense to hear Mr Fry. It's like a useless laughter track which detracts from the main point of the book.

Perfect writing, pace and narration. Full of humour, well researched and historically sound. I came out of the first episode with three more books in my reading list, a novel interest in Kaiser Wilhelm's private life, some reflection of ante littera queerness and greater admiration for British storytelling than ever.

Historical version of Daily Mail side bar of shame

If you love a bit of prurient
gossip about people that are no longer living this is for you. Thoroughly boring.
Of course Stephen Fry is a great narrator but it can’t save the poor content

Interesting, but that piano music....😖

Maybe I’m just too old and grumpy, but why do we need constant background music which brings nothing to the party? During this series of podcasts, that irritating piano is actually painful on the ears. Stop it. Stop it immediately.
If you can get past the racket, the stories are entertaining and informative. I, unfortunately, don’t enjoy trying to strain out the grating background irritant so won’t listen again. Shame really...

I stumbled across this and was just so impressed the history and stories are fantastic and the presentation is so theatrical I really enjoyed listening and was disappointed when I'd finished that there wasn't more like this, Stephen Fry is definitely the icing on the cake reading this.

Absolutely loved it, I started Victorian secrets when I couldn’t sleep then I was hooked! I’ve been listening to it in bed, while doing housework and on breaks from work. Some interesting stories and real anecdotes from Diary’s and other writings from people of that time.

I do agree with some other people’s comments about the music though but this is worth looking past that in my opinion.

Exquisitely performed, with sharp wit and just a sprinkling of mischief. Great company on a long journey.

Thank you Stephen for sharing the Victorian Secrets with us! I didn't even know where the Kaiser was before listening to this episode!