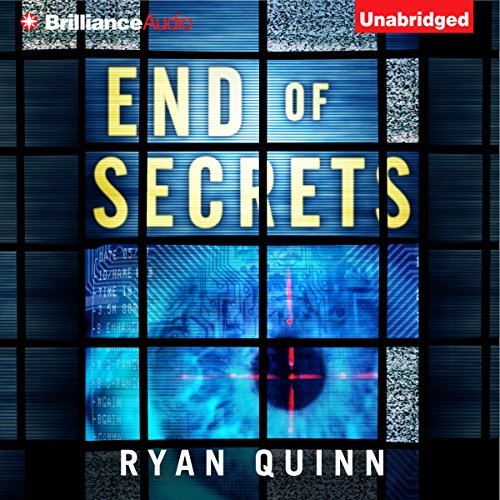 Though her specialty is foreign cyberterrorism, CIA agent Kera Mersal finds herself plunged into a bizarre domestic case. Singers, writers, and artists are disappearing, leaving no trace in a world where everyone leaves a digital footprint. Posing as a journalist, Kera attempts to track the artists' last-known movements.

On a hunt that takes her from the underground art scene to a rogue domestic spying program, Kera finds her investigation on a deadly collision course with ONE Corp., the world's largest multimedia conglomerate. As she's drawn deeper into the investigation, she discovers that an enigmatic young ad exec, a wealthy playboy, and a mysterious website may connect the missing artists and ONE's growing power. And with each discovery comes confirmation of a terrifying truth - no one's secrets are safe.

A smartly suspenseful and timely thriller, End of Secrets dives into the depths of our culture’s two most relentless obsessions: entertainment and profit.

Just OK For Me

This book is a modern techno-sci-fi-&quot;thriller&quot; (quotes because most of it wasn't that thrilling) complete with government conspiracy and technological applications that are thoroughly impractical (more sci-fi) in the modern-day setting in which it takes place. Nonetheless I thought the premise of this book had a lot of potential, and it was pretty engaging at the beginning, but by about 1/3 through it starts to feel like it's dragging. Even though things are happening I found myself bored and not really caring, but I pushed through to the end, hoping for a big bang to make slogging through the middle worthwhile. Although the end is sufficient, it's certainly not the bang I was hoping for, and left me feeling overall ambivalent about the book. It's not great, it's not terrible, it's a relatively average book built on an interesting premise.

Being a a tech person I had higher hopes for this story, took me a long time to get involved in it; I finally realized it was partly due to the narrator who had little enthusiasm for the character she was portraying.

The narrator was top notch. She is one of the best I have heard. I listened to this on a long car trip. It held my interest but had several subplots that were never resolved to my satisfaction I also found the story somewhat disjointed.

Both thought-provoking and entertaining about the use of personal data

Enjoyable novel about what happens when we all our data is concentrated into a single place and used for… ??? Well written, researched and a lovely audio performance with interesting commentary on the role of news and art in today's data rich society.

This would have been Astonishing in 2007.

Felt like a made for TV movie. Felt rushed, esp. near the conclusion. For anyone who has NO clue about Government wire-tapping, 24/7 video surveillance or that everything in the "Cloud" emails, data stored, transactions online and offline accessed, nearly all computer traffic data will identify you (even anonymously) has little or no expectation of privacy. This will be eye-opening to them. But in the years since Snowden, Wikileaks, and fictionalized programs like "Person of Interest" readers in my opinion will need a lot more to be surprised. Even without the technology & privacy consideration--the story could have used some additional development.

What could Ryan Quinn have done to make this a more enjoyable book for you?

Even without the technology & privacy consideration--the story could have used some additional development.

I read the book but had to stop the narrator 1/2 way through. Their voice and style was more distracting than usual. Most narrators whether you like them or prefer a specific person, you get into the groove and focus on the story. Not so much here.

Was End of Secrets worth the listening time?

Not the listening time. The book itself for newbies, yes.

I got this in the Amazon first program and the concept seemed interesting. But, the story quickly loses its mystery and became pretty boring very fast.

The details have made a some what boring book excruciatingly boring. The placement of the drums then everything visible on the street added nothing to the story.
I haven’t even finished the book yet, but wrote a review anyways.

Probably one of the best books I have listen to, my first book by Ryan Quinn but I guarantee it will not be my last. Great story, not only well written but interesting and exciting all the way through .