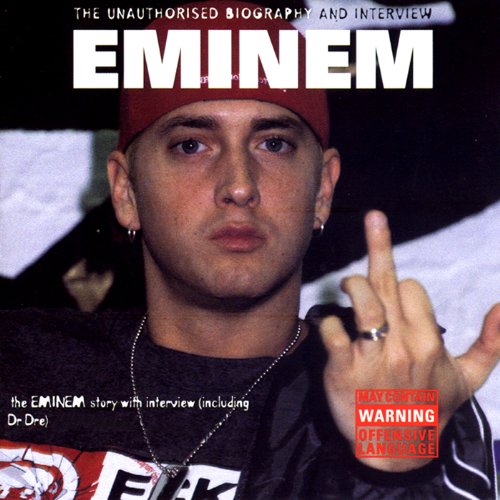 Back in the year 2000, Marshall Bruce Mathers III (AKA Eminem) shook the public with his provocative, obscenely brilliant second album The Marshall Mathers LP. Eminem: A Rockview All Talk Audiobiography features Eminem himself answering questions from this time period, allowing him to paint a picture of himself in his own words. Recorded live at a press conference more than a decade ago, the audio is scratchy and at times difficult to hear, though an accompanying funky backbeat compensates for some of the noise. Despite this, this audiobiography will be of interest to Eminem obsessives keen to hear how the artist represented himself at the turn of the new millennium.

Shock, controversy and pathological rage are the order of the day with Eminem (Marshal Bruce Mathers the III - aka Slim Shady) . In a short few months, he became one of the most provocative, outrageous, and obsessive rappers in contemporary music. As Eminem rocks the rap world, the hip hop community greets him with open arms and rock stations and the fans just can't get enough.

This is not an artist or record company music release, and sound quality varies due to the nature of recordings. This Eminem audiobiog is a unique and exclusive recording of one of the biggest music success stories of the millennium.

Described as sarcastic, offensive, foul mouthed, his cynical outlook on life has struck a chord with millions of rap fans. Every collector, fan and music historian must have this.

What listeners say about Eminem

struggle to finish this one couldn't stay into it. I wouldn't recommend it to anyone