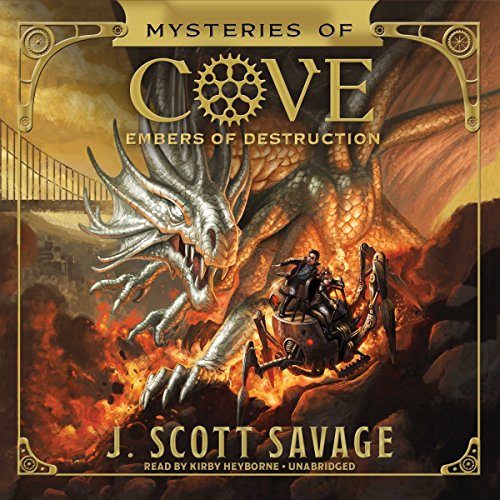 By: J. Scott Savage
Narrated by: Kirby Heyborne
Try for £0.00

In the third and final volume of the best-selling Mysteries of Cove series, Trenton and Kallista - along with their friends, Plucky, Simoni, Angus, and Clyde - fly their mechanical dragons south toward San Francisco, looking to rescue any survivors from the battle of Seattle.

Arriving in San Francisco and investigating the area in secret, the young riders are reunited with Kallista's father, Leo Babbage, who reveals that the humans in the city are working as slaves to the dragons, but that they don't want to be rescued - himself included. He says they are being protected by their new master: a huge, powerful white dragon who lives in an impenetrable tower fortress overlooking the city. Kallista is stunned by the news. Why would her father ever willingly want to work for dragons?

Trenton and his friends are confronted by the guards and their mechanical dragons are seized. Evading capture, the young riders escape and begin looking for a way to break the white dragon's hold over the city - and over Leo. Working with the kids from the city, the young riders track down the source of the dragon's power to an underground chamber accessible only through an underwater passageway below the tower fortress.

With the white dragon watching their every move, Trenton and Kallista will need every bit of creativity and ingenuity they can manage to find a way to retrieve their stolen dragons, enter the tower fortress, and take down the dragons once and for all.

What listeners say about Embers of Destruction

what an awesome series

I'm so sad this is the last in the series but it was a wonderful book. no immorality, no swearing, no sex, no hidden agendas. just awesome.

Absolutely fantastic book and series. I was hooked from the start and every book got progressively better and more captivating. I fell in love with each and everyone of the characters, loved the crazy out there storyline, and I am an official fan of Scott Savage. Highly recommend!

Warmed up to a very exciting and thought provoking end

I was regularly annoyed at Heybourne’s narration- pronounced turbine engines “turbans” sometimes his expressions leave something to be desired. Also, sometimes the first book in the series was a bit rough in development. But book two and three got spinning well and finished great. Quite impressed and looking forward to following this author as he keeps honing his craft.

Embers of destruction was great to listen to and kept me entertained for hour. I highly recomend it

Well narrated, interesting story, and excellent world building. The story is direct, but with enough twists to keep you interested in whats going to happen next.

This was fun to listen to. even as an adult I didnt want it to stop

could have added a little to the end.

I felt like the ending was a little rushed. overall i enjoyed the book.

We need more of this book it was an amazing read! Couldn’t stop listening and spent lots of long night listening to the books

I loved 😆 the book and I wish that there were more of the series. I am going to say that the last book is a lit but sad 😭 but you will get over it.

Oh my gosh I so love this series

This series makes you happy, makes you sad, makes you smile, makes you glad it has its ups and downs like all life it was a wonderful story thank you and I hope to find more like this one.