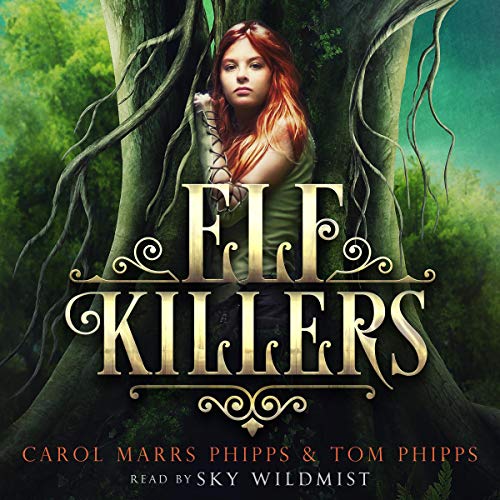 “Not for the fainthearted! Kids die horribly, and amid the trolls jockeying for leadership is trial by head bashing.”

For the Elves, it's the very worst time to be in the woods.

Trolls are hunting them down.

Will they live long enough to reach a safe place to live?

Oisin’s plan is to come with his bow to help Aedan and Doona lead a party of children into the forest to gather the maidenhair seedlings his people would take across the sea as they flee the trolls who hunt them as prey. Maybe he can be back in time for supper. And if he only dares to dream, he might also be back in time to speak with Doona alone.

Dyr's plan is an early evening head smash for the foolish Elves who think they can steal away to the sands of the endless eye sting water and build their strange float huts. They will make a glorious feast.

But on the way, Dyr's brutes stumble across Oisin's gathering party and attack, leaving Aedan mortally wounded and scattering Doona and the children to flee in terror into the dark mountain woods, only to be run down and captured by the bloodthirsty trolls.

Can Oisin find the bonfires of the trolls and rescue them before it’s too late?

And what then? Will any of them live long enough to reach safety?

"Elf Killers is about death...and life. Seriously imaginative (especially troll-speak!) and gritty in action and battle, this is worth a read...but be prepared! Oh, be prepared. I dare you to grab a copy!"

Warning: If This Were a Film It Might Be Rated R

What listeners say about Elf Killers

Having read Elf Killers, I looked forward to listening also. Hearing it has definitely added that something extra! Set in another place, elves and trolls are pitted against each other, and the action is non-stop. Add into the mix killer birds and harsh conditions, and every breath becomes a test in survival. Not for the fainthearted. Kids die horribly, and amid the trolls jockeying for leadership is trial by head bashing. Reading Elf Killers is quite the mission; listening kinda made it easier to deal with.

Amid the carnage, there is beauty. Graceful unicorns, magnificent forests and mighty mountains gift this tale the reason for survival, as does love and friendship. Never surrender to what seems inevitable is the overriding message, in my opinion. Elf Killers is about death … and life. Seriously imaginative (especially troll-speak!) and gritty in action and battle, this is a worthy read and listen … but be prepared!

Great story, great narration, and well-paced, given the degree of action.

The invented language had me enthralled!

I love audio books. I listen often when driving and will frequently pull over to listen especially when the story becomes dramatic.
Elf Killers is a new genre for me. I was hooked! It is beautifully and sympathetically narrated from, start to finish.
For fantasy fans, it's a 'must-listen.'
I had no problem with the invented half language, in fact I loved it all. How smart and original!
Violent in places, yet it slots into the narrative perfectly.
As a story it never lacks pace or suspense. If you are not enthralled. I will be surprised!

One of the worst books I have read/listened to!

Elf Killers
By: Carol Marrs Phipps, Tom Phipps
Narrated by: Sky Wildmist
This was a book the authors were giving away on Twitter. I love the title and the cover is amazing! I love fantasy so I asked for a code. Now am I sorry! This is one of the worst books I have read/listened to ever! Those that know my reviews know I am honest and am easy on the ratings. But this was terrible.
First, no plot. Flat characters. The endless obnoxious troll language, made worse on audible with lots of grunts going on and on! The trolls eat elves but the violence against children in how they killed, butchered and roasted them was not necessary. Lots of TELLING and not SHOWING!
The narration was in a heavy Scottish or Irish accent and difficult to understand. She also recorded it maybe too close to the mic because it has a constant sssssssss sounds with almost ever word.
I am glad this was free but I wish I had passed on this deal. I really wanted to like this book.

When Imagination and Reality Join Hands

Elf Killers, by Carol Marrs Phipps and Tom Phipps, is a clever fantasy stitched together with a neat amount of realism. There’s constant menace, the conflict that drives the story, for our Elf clan as they seek refuge from the Trolls who hunt them for slaughter.

There’s sensitivity as we’re brought into the world of the Elves – choose our favorites – embrace them for their human qualities – identify with them for their failings and rally with and for them during their successes.

The creative landscape, the worldbuilding, brims with danger and a vast assortment of mythical creatures. Elves, Trolls, Sprites and Unicorns along with a few ingenious creations I imagined finding in a book of Greek myths. (I loved and hated the Strike Falcons. And appreciate any writer who can make me love and hate an antagonist or antagonistic device.)

But Elf Killers is hardly just another Mythical Creature fantasy. It’s deeper. It’s about us and our struggle to survive in a world we often question but accept, because… we must. We, like the Phipps team’s Elf clan, have been granted few if any alternatives. (No one has handed us the ‘right’ to survive this journey. Often, we must fight for that survival.)
Run, face the menace… cry. These are human, often reflexive, decisions we make every day, and I applaud these writers who have craftily woven this very real, very human condition into their fantasy story.

What I liked most:

Character development.
The authors were diligent with their creation of believable characters who reveal a broad assortment of human qualities: Courage – compassion – fear – aggression – weakness – honor – loyalty and strength.
As with all good fantasy writing, while listening to Elf Killers, I was able to release that logical, conceptual part of me that knew these were fictional creatures and began seeing them as real. I attached myself to their plight and empathised with them for their fears and losses.
This is an ability that we, as adults, lose that children do instinctively. A nod here to the authors for their ability to pull their readers into their magical realm by making it just real enough to feel organic.

Story construction:
The outline is logical, fits a neat three-act structure and builds and releases tension with precision. Early on, I began imagining this as the basis of a screenplay for a fine animated film. “The genius writers at Pixar would do wonders with this story.”

Audiobook Reader:
Sky Wildmist is a super audiobook reader. Her clear narrative and ability to change her tone for each character seems almost supernatural. When I make the move to audiobooks with my collection, I will, without reservation, be looking to Ms Wildmist for a quote.

Criticisms:
Only one, and nothing that would lessen my 5-Star rating or high recommendation.
There were many characters. This made the story confusing at times. I listened to the wonderfully read audiobook twice – mainly to gauge the story structure and character consistency for my review, but also to reacquaint myself with certain characters who’d been introduced earlier wishing to place them into context.
I believe, had I listened to this book in one sitting, or while NOT reading three other books, I would not have suffered this confusion.

Summary and Recommendation:
Elf Killers is a fast-moving, Fantasy / Adventure with heart and boundless imagination. If called upon to classify it, I would place it on the same shelf as the first two Harry Potter books and the Percy Jackson books. Essentially a Young Adult, myth-based fantasy that will also satisfy an adult who enjoys letting go and consuming middle-grade fiction.

I give The Elf Killers 5-Stars and my highest recommendation.

This is my second audiobook from the writing team of Carol and Tom Phipps and again I was not disappointed. I am not a super avid reader in this genre but I have been trying to expand my repertoire recently and am glad I chose this kind of fantasy adventure. Since my early reading of Tolkien, I have been fascinated by trolls and elves and the like. These authors add to the mythology in their work with an adventurous story full of interesting characters and an involved plot (which is a must for me). I especially loved the troll "language," as brought to life by the reader. The tale is imaginative and I highly recommend it.

Based on the summary and the amazing cover art I was looking forward to this one.... but it was disappointing. It does start off pretty quickly in the action, but it's pretty gruesome with the description of trolls killing elves and elf children then the way they eat and dismember them too-- it was just too much. The troll manner of speaking is very choppy and although inventive was weird and distracting. On top of that the whole plot was the elves trying to save others captured and escape the trolls, overall sadly it fell flat for me.

The narrator was ok, she spoke a little slow and I had to put the reading speed on 1,25 to get it closer to a normal speed. She used primarily British and Irish accents which were fine but some of the characters voices were the same and during some of dialogue it was a bit hard to track.

—I was given this free review copy audiobook at my request and have voluntarily left this review.