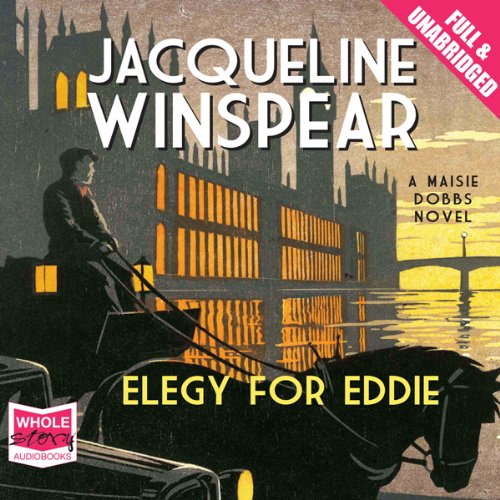 By: Jacqueline Winspear
Narrated by: Julie Teal
Try for £0.00

April 1933. Eddie Pettit is a gentle soul with a near-magical gift for working with horses. When he is killed in a violent accident, there is skepticism about the cause of death. Who would want to kill Eddie, and why? Maisie Dobbs is determined to offer her help. As she uncovers lies and manipulation on a national scale, Maisie must decide whether to risk it all to see justice done.

What listeners say about Elegy for Eddie

Where does Elegy for Eddie rank among all the audiobooks you’ve listened to so far?

She embraces the time of the 1920's just enough with out over doing it, charictors are very true to life where no one is perfect. Coming close to the narrative story tell skill of Agatha Christie

Charming novel, full of well observed human nature it limits of perception and floors of judgment and personal perception.

What does Julie Teal bring to the story that you wouldn’t experience if you had only read the book?

Nice pass, good characterisation and easy to listen to with out zoning out of the narrative thread.

What would have made Elegy for Eddie better?

Quite why I've struggled through the Maisie Dobbs series I can't explain but this will definitely be the last one I will tolerate. Implausible characters, most notably Maisie Dobbs herself, the story line is weak and the revisionist take on Churchill's role in the lead-up to the Second World War insulting. No idea who Winspear thinks her audience is for this trash apart possibly from an unquestioning American audience who can't see through the clunky attempts at social and historical commentary.

Has Elegy for Eddie put you off other books in this genre?

No, still love whodunits in general and most recently enjoyed The Cuckoo's Calling.

Have you listened to any of Julie Teal’s other performances? How does this one compare?

No I haven't but it was very good and Julie Teal can't be held to account for the poor material. Compares very favourably with the American reader (Orlagh Cassidy) of the same novel which I had to abandon because her grasp of English regional and class based accepts was so woeful (for example she rendered a Glaswegian with an Irish accept) and her attempt at an upper class accent was terrible, whoever told Cassidy that she could render an English accent did the world a disservice).

What character would you cut from Elegy for Eddie?

I am so exasperated by the Maisie Dobbs books I am moved to write this, my first review on Audible. Perhaps I'm most annoyed with myself for reading this rubbish in the first place. In future I'll stick with D L Sayers and Alexander McCall Smith.

History brought to life and a good story also

Excellent storytelling which also gives an insight into the 1930s. The build up to world war 2 against a background of recession is illuminating and interesting. Maisie Dobbs is a great character and will hopefully continue to develop in future books.

May they know Peace

Another gripping intricate drama, perfectly narrated. This author is a mistress of the word and it's power. RECOMMENDED

This is a very enjoyable tale, with twists and turns. You don't find out the answer to all the cases being worked on at the same time until towards the end and some are unexpected. The story is well written and we learn quite a bit about life in London and the people involved in many walks of life just before the outbreak of the Second World War.
Ms Teals narration is very good and easy to listen to. And Ms Winspear has me gripped from beginning to end. I look forward to another of her books soon.