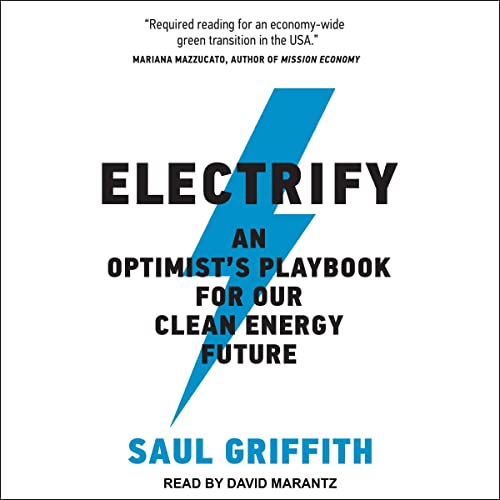 By: Saul Griffith
Narrated by: David Marantz
Try for £0.00

In Electrify, Saul Griffith lays out a detailed blueprint - optimistic but feasible - for fighting climate change while creating millions of new jobs and a healthier environment. Griffith's plan can be summed up simply: Electrify everything. He explains exactly what it would take to transform our infrastructure, update our grid, and adapt our households to make this possible. Billionaires may contemplate escaping our worn-out planet on a private rocket ship to Mars, but the rest of us, Griffith says, will stay and fight for the future.

Griffith, an engineer and inventor, calls for grid neutrality, ensuring that households, businesses, and utilities operate as equals; we will have to rewrite regulations that were created for a fossil-fueled world, mobilize industry as we did in World War II, and offer low-interest "climate loans." Griffith's plan doesn't rely on big, not-yet-invented innovations, but on thousands of little inventions and cost reductions. We can still have our cars and our houses-but the cars will be electric and solar panels will cover our roofs. For a world trying to bounce back from a pandemic and economic crisis, there is no other project that would create as many jobs - up to 25 million, according to one economic analysis. Is this politically possible? We can change politics along with everything else.

What listeners say about Electrify

Great material but why no pdf?!

This book has countless tables and charts that are referenced yet no accompanying pdf. First audio book I have ever purchased without such a pdf. Pretty lame.

The messages in this book are crucial for anyone interested in learning how they (and their cities and societies) can most effectively make an impact on combating climate change. The content is relevant and accessible to general audiences. I recommend getting through the appendices as well, where Griffith offers specific calls to action for various audience types. Narrator voice wasn't particularly engaging for me so it took several weeks to get through. I recommend acquiring or borrowing a physical copy to get the full benefit of data visualizations, which are harder to understand when narrated. Nevertheless, I'm grateful there's an audio version since audiobooks is how I get through most of my nonfiction these days

roadmap to the energy future

Great outline of a way forward on energy infrastructure. Whole some of this book is a rehash off known ideas he also has some less well known concepts. Even as someone who has worked in a related field and knows a bit about the subject I leaned a decent amount from this book.

Caveat: I’m only in the first chapter, and it’s possible if unlikely, that things will improve. However I will probably quit and ask for a refund before I finish the chapter.

I’m really excited to read/listen to this book. I have heard Griffiths a few times promoting the ideas behind Electrify and I find him a compelling, funny speaker. The person the picked to record this book is like the complete opposite-uninteresting and flat. It’s one step up from the adobe reader’s computer generated “reading” of a random pdf. People need to listen to what Griffiths has to say. The choice of reader for this book actively works against this goal.