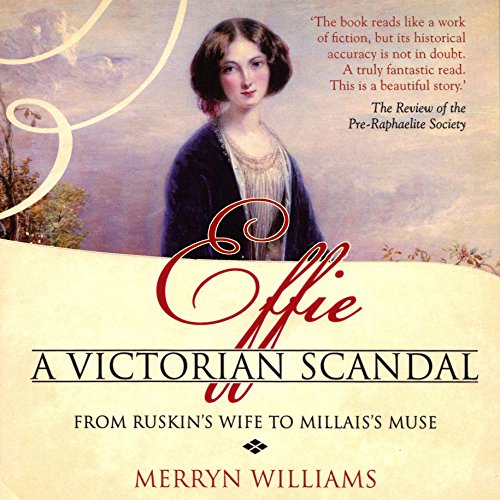 Victorian scandals don't come much more intimate and revealing than a wife seeking an annulment from her famous husband because their marriage has not been consummated. When Effie Ruskin sought escape from her desperately unhappy life with art critic John Ruskin, she shattered the Victorian illusion of the perfect marriage. That she could then dare to hope for respectability and even happiness as the wife of artist John Everett Millais fuelled a scandal that was to reverberate around Victorian society for years to come.

Ruskin, Millais, and Effie were exposed to the kind of gossip today's wannabe celebrities can only dream of. Effie was regarded as mentally ill, immoral, and certainly tainted - Queen Victoria initially refused to receive her - while Ruskin was seen either as noble and virtuous or deranged and impotent. Ruskin was repelled by Effie's body; Millais used her as a model in some of his greatest paintings. Millais went on to become one of Britain's most popular painters, but the stigma of his wife's past would never be forgotten.

From the heart of the Pre-Raphaelite Brotherhood comes a story as fascinating today as it was shocking in the 1850s.

What listeners say about Effie

I had heard the outline but it was fascinating to get to know Effie through her own letters. Having done so I have huge respect for her, and compassion perhaps for Ruskin.

The narration was good overall, but the speaker's rendition of some male voices seemed a little artificial - however, this did not spoil the enjoyment.

A touching défense of a Victorian lady caught in a loveless marriage to a highly acclaimed, famous man.

Beautifully researched including many quotations from original letters and manuscripts Merryn Williams tells the tale of a young girl from Perth who enters into a marriage with John Ruskin. Effie Grey lives to bitterly regret her decision to marry Ruskin. But she is introduced, through Ruskins circle to Millais, a promising young artist with whom she falls in love. We learn how Effie manages to extract herself from her loveless marriage and find forfillment with Millais.