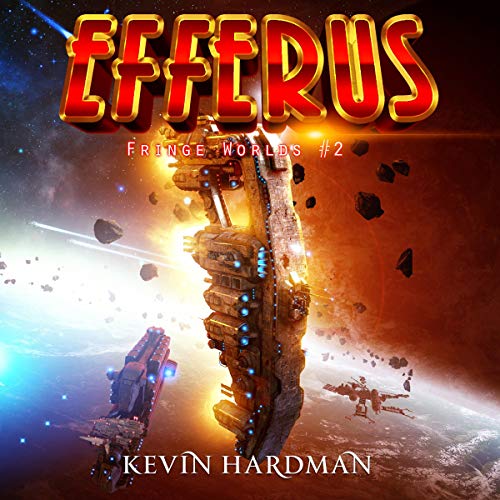 By: Kevin Hardman
Narrated by: Mikael Naramore
Try for £0.00

At the edge of known space, Marine Lieutenant Gant Maker continues his vengeful pursuit of the alien race known as the Vacra.

Now confirmed to have stolen weapons and tech so advanced that it can’t even be classified, the Vacra represent a menace unlike anything mankind has ever faced. For Maker, the threat is also personal, as the treacherous and cunning insectoids - still smarting from their stunning defeat at his hands during their last encounter - have specifically targeted him for capture, along with his exotic alien companion, Erlen.

Going well beyond any charted or civilized worlds, Maker and his loyal crew of misfits once again find themselves outnumbered and outgunned. With the fate of humanity hanging in the balance, even their unique talents may not be enough to overcome the odds this time, which include not only the Vacra’s alien armada, but a mysterious being with the ability to utterly destroy anything it touches.

What listeners say about Efferus

Wow, I love this series (but then again I have loved every series that Kevin has written about so it's not unexpected.) This book is the second book in the series and there had better be a third because I just can't get enough. It is so unpredictable with plenty of action and set in another world with strange creatures and aliens, so what is there not to enjoy and it is a book you can listen to again and again. With wonderful characters and a great writing style that keeps you listening this is a must have book.
This book sees Maker and his rag tag band of marines and civilians on the hunt for the Vacra, an alien race with a deadly past of killing every thing in it way. It's not long before they are on the hunt or before the Hunter becomes the prey, with grave and deadly consequences.
The narrator is just brilliant and I just love his range of voices for each of the characters, it's like several people reading the story to you so it never gets dull or monotonous.

The most dangerous mission yet for 'Madman Maker ' and his crew of misfits, intriguing plots & some ingenious inventions hold the attention, in this highly enjoyable, fast-paced tale.

After listening to the first book I had high hopes for the second and i was not disappointed!
The characters work great together, the action is fast without becoming confusing or rushed. As seems to be usual with this series every time that you think that you know what might happen next it goes off in a completely different direction.
The narrator remains at his usual high standard, performing a range of distinctive voices without becoming odd sounding that can happen with some narrators.

Overall I really liked this story and even though I was given a free copy of this to provide a non-biased review I will be buying the next in the series.

Maker's romantic issues are so funny.

Continuing on from Terminus, Gant Maker is on a new mission with his crew. This time they are not only going to find the Vacra, this time Maker is out for revenge, in particular on Skullcap. Meanwhile, they are still after his alien companion Erlen, who has numerous powers which make him extremely valuable to the Vacra.
Maker's romantic issues are so funny. He acts all tough most of the time and can generally deal with any danger thrown at him, but a little flirting has him dazed and confused! It's a good thing his love interest is more than an match for him.

I loved the first one in the series and book two did not disappoint. It is action packed and fast paced. I love the world the author built and would be great as a movie.
Would highly recommend it.

I enjoyed this one a lot although it did take me a while to get back into the story with being a gap from the first story.
Hardman does well with this and i enjoy his space scifi adventures.
Narration is by Naramore so i cant fault it at all.
Can't wait for more on this one.
I requested this audio and have decided to leave my thoughts on this for everyone.

Awesome, where can I get my own Erlen?

Efferus by Kevin Hardman and narrated by Mikael Naramore is an audible book I requested and the review is voluntary. This series fills the Firefly hole in my heart! It has all the daring and unconventional escapades, the unique but skilled crew, and the great interactions between them. Lots of action, always in trouble somehow, new and exciting adventures, great plot, and it leaves me excited for the next book!
The narrator is spot on with voices, emotions, and makes the book just that much better! Thanks!

4.45/5 Efferus by Kevin Hardman
Narrated by Mikael Naramore
Summary:
Gant Maker and his small company of misfits set out to find the dreaded Vacra.

Additional Comments:
- I enjoyed the story, but it’s more about the characters than the plot. My favorite parts were near the beginning when it turned more into a heist book than a quest to hunt down the bad guys.
- Not sure how they get fuel in this universe. They seem to be doing an awful lot of traveling.
- The romance angle seemed tacked on for the sake of having one.
- The series is compelling because it’s got a likable character in Maker. Sort of the military man who’s misunderstood but still loyal. He’s a bit like Reacher in attitude and action.
- The world-building’s cool too. Erlen especially is a fun addition to the crew. Revered, misunderstood alien who’s part chemical factory and part puppy dog at heart.
- Performance was fine. Naramore’s not my favorite narrator, but he’s got talent and puts a lot into his performances.

Conclusion:
If you’re looking for excellent scifi, check out the Fringe World series. You can read this without having consumed the first, but as with most series, it will be better in order.
*I received a free copy of the audiobook. I have freely chosen to review it. All thoughts are my own.

Hardman and Naramore are a team that can’t be beat. Between Hardman’s mastery over the written word abs Naramore’s masterful narration, Efferus kept me entranced. I’m 67, but when I had to turn the narration off I poured like a 2 year old. Great job you two!

I hope to one day write a book like this. it has been r a good story so far

After listening to the first book in this series, ‘Terminus’, and loving the story, I requested a free review copy of the audiobook for ‘Efferus’. This post is my voluntary opinion of it.

Spoilers for Book 1 ahead. Read/listen to it if you haven’t. It’s great too.

Book 2 of the ‘Fringe Worlds’ series, ‘Efferus’, continues the story of Marine Lt Gant Maker, his companion Erlen, and his rag-tag crew in their quest to find the aliens known as the Vacra. Years ago, Maker was the sole human survivor of an attack from the Vacra while investigating a derelict research vessel in an area of space called the Beyond. The Vacra stole the experimental technology from the vessel and are attempting to use it against humankind. In Book 2, the reader is treated to another action-packed sci-fi adventure courtesy of author Kevin Hardman.

Maker is the kind of character I love. He’s sarcastic, a little loose with the rules, smart and capable. He cares about his team and is fiercely protective of Erlen. All of the characters bring their skills to bear in the hunt for the Vacra. Hardman’s well-drawn characterizations are a big part of what attracts me to this series. The Vacra are no match for this misfit team.

While readers don’t hear any of the story from Erlen’s POV, we come to understand from his actions that he is much more intelligent than his human companions. I echo other reviewers when I say, ‘I want my own Erlen!’ As much as I love Maker, I’d still like to see Erlen have a story all his own.

Hardman’s world-building is spectacular. He gives the reader fringe world dealings (reminiscent of ‘Firefly’), some nail-biting space action, a planet that serves as a spaceship graveyard and wonderful interactions with a heretofore unknown entity.

There is no better-suited narrator for this series than Mikael Narramore. He captures Maker’s sarcastic tone perfectly. His interpretation of the story brings it to life for me.

Full disclosure: I received a free review copy of this book and am voluntarily leaving a review.

Efferus was a great addition to the Fringe World series and it makes me excited to read the third volume. If you enjoyed the first book, then there should be no reason not to read this one.

Naramore is a great narrator and Hardman knows how to tell a good story.

Hardman does it again. This book picks up directly after Terminus and continues the adventure of LT Maker and his rag tag team of cast off space marines. Loved the book. It had the right amount of action and dialogue. Don’t hesitate buy it.

OMG! This Second book was so much fun to listen to, and the characters and Story was definitely reviting! To say I like this book would be a understatement. The Narrator did a Excellent job of bringing this story to life and same with the characters. I highly recommend this series and especially this Story.

Efferus: Fringe Worlds book 2 is full of action. Marine Lieutenant Gant Maker pursues the menacing alien race known as the Vacra, as well as a powerful mysterious being, in a battle for mankind. Will Maker and crew overcome the seeming unsurmountable odds and save humanity? Find out in Efferus; much excitement and adventure awaits. Great narration!!