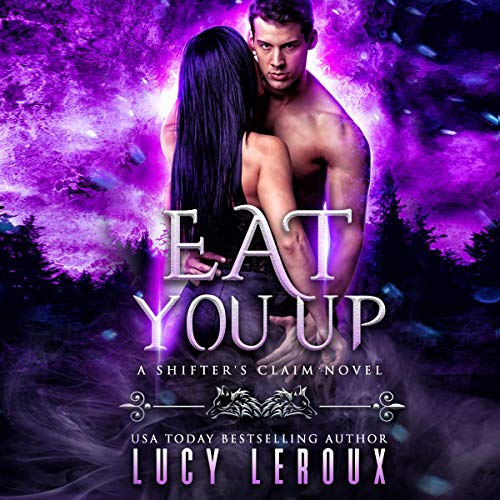 By: Lucy Leroux,L.B. Gilbert
Narrated by: Addison Barnes
Try for £0.00

Dmitri, a werewolf and thief for hire, finds his true mate under the worst possible circumstances - at 35,000 feet.

Dmitri, a high-end thief, is flying cross-country for a lucrative job, when the woman destined to be his mate is seated next to him. Her scent drives him to the edge, but he manages to control himself on the flight by the skin on his teeth and fate - by way of the flight being diverted because of a terrible storm.

Nina isn’t sure why she’s trying so hard to get home in time for her sister’s wedding, given that the groom is her ex. But indulging in an affair with the aggressive and attractive man who has come to her rescue brings worse problems to her table. It’s just supposed to be a fling, but Dmitri clearly has no intention of leaving - ever.

When Dmitri’s new employer turns out to be Nina’s ex’s father, the line he spent a lifetime blurring becomes crystal clear. Unfortunately, by the time he realizes this, it may be too late to save his mate.

The Shifter’s Claim series is a shared shifter world written by one person: L.B. Gilbert aka Lucy Leroux. If the book has Lucy Leroux listed first, expect steamy scenes! Those with L.B. Gilbert listed first are clean fun rides with a lower heat level. All books in this series can be listened to independently.

What listeners say about Eat You Up

Dmitri is on a flight to a job and meets his mate Nina on the plane. The weather strands them and they must drive to their destination. They start a relationship but Nina thinks it is temporary. Dmitri learns that his job is intertwined with Nina's and he has put her in danger. He must now work to keep them save and tell her what he is.
🎧 Audiobook Obsession

Eat You Up by Lucy Leroux is a paranormal romance that I listened to on audio narrated by Addison Barnes. This is the second book in the Shifter's Claim series and can be read as a standalone.

This is the second book of Lucy's that I have read and it definitely won't be my last. I really enjoyed the relationship that bloomed between Dimitri and Nina. I really enjoyed getting both of their points of view throughout the book. It really brought the story to life.

Addison did a great job on the narration. I look forward to listening to more of her work in the future.

I would recommend this book to anyone who likes paranormal romances or romantic suspense.

I love a good shifter romance and this one had some interesting twists which is always nice. While the FMC was a bit more of a push over than I usually go for the overall story was still sweet and had some heat (not much but a bit) I’d recommend to this to someone who doesn’t have to have a very strong willed FMC and who likes some heat but not fire in their romance books.

This is a good storyline. With likeable characters this book is very enjoyable. There’s plenty of action and adventure. A great performance.
#audiobookobsessionreviewer

This was a fun, thrilling sexy as hell read. I didn't want to put it down. I love the main characters and how they connected.
Highly recommended.
Great narration

This was a pretty interesting listen. I enjoyed the story and the narration. The cover is very eye catching. The story was written pretty well, and I enjoyed the characters. It truly is a standalone, since I have not read book 1, and didn't find I was missing anything.. Well worth a listen.

Loved the chemistry between the build up between the H/h. Especially on the plane, so fun. Well built strong characters with a great love story mixed in with a good mystery. I thoroughly enjoyed the entire audiobook and look forward to reading more by these authors for sure! Even though it's a series, the entire story was in this audiobook. Great story! The narrator was very enjoyable to listen too.

The blurb intrigued me but it didn't really set me up for how much I enjoyed this story. It drew me in slowly across the course of the book till I had a burning need to know what was going to happen. I like the characters and the way they interacted with each other. It just flows so well. The was Addison Barnes brings the characters to life works so very beautifully. Really enjoyable.

This book was so good! I thoroughly enjoyed it. Dmitri, a werewolf and thief, meets Nina, a doctor, on a plane when he is forced to sit in coach. She is his seat mate. The plane ends up being diverted due to extremely bad weather and they end up together. This is the beginning of their smexy story. Nina’s sister was marrying Nina’s ex and she had to go to the wedding. I loved when Dmitri showed up. He just took over everything and everyone with his commanding presence. Dmitri has what can be a very dangerous occupation even though he poses as an air marshal complete with gun and badge when he tells Nina his job. I love how Nina reacted when she found out he was a wolf but not the circumstances. The pace of this book is great. This book was so good that I wanted to listen in one sitting but that was not possible. I really enjoy Lucy Leroux’s writing style. I highly recommend this book.

Addison Barnes did a great job with the narration. She nailed Dmitri. I could just imagine the tall, well-built hunk of a man/werewolf. I received this free copy audiobook at my request and have voluntarily left this review.

It got all muddled.

At first, this story was exactly the escape I was looking for. Alpha paranormal male, strong, independent woman, unlikely meeting. Great writing, good narration (with the exception of a few mispronunciations and the wrong accent on a main character).

But then, things got ridiculous. The whole espionage and introduction to Cass worked fine. But then, it turned into a boring version of Mission Impossible, and I found myself skipping through most of the latter half of the book. The story about the two main characters fell by the wayside, replaced with the random insertion of vampires, witches, and a fight for a damn necklace.

I was so excited to find exactly the kind distraction I was hoping for during this time of stress. Instead, I'm sad I lost this credit.

Eat You Up is an insta-love paranormal romance, a fabulous collaboration by Lucy Leroux and L.B. Gilbert. The storyline is fun, playful, humorous, and scorchingly hot; I was wholly entertained. I adored the main characters, Nina, the headstrong heroine and, Dimitri, the swoon-worthy hero, were absolutely delightful. Addison Barnes did an excellent job with the narration, bringing the characters to life.

This was a gratifying listen and, I can't wait to hear the next book in the series. I was given a free copy of this audiobook at my request and have voluntarily left this review.

This story had a great storyline. I enjoyed the characters and the pace of the story. The narrator does a great job telling the story. I look forward to more from the author and narrator.
#TheFlock

Eat You Up by Lucy Leroux is a paranormal romance that I listened to on audio narrated by Addison Barnes. This is the second book in the Shifter's Claim series and can be read as a standalone.

This is the second book of Lucy's that I have read and it definitely won't be my last. I really enjoyed the relationship that bloomed between Dimitri and Nina. I really enjoyed getting both of their points of view throughout the book. It really brought the story to life.

Addison did a great job on the narration. I look forward to listening to more of her work in the future.

I would recommend this book to anyone who likes paranormal romances or romantic suspense.

Eat You Up (Shifter's Claim, Book 2) drew me in the beginning and I enjoyed the plane ride. Dabbles with a bit of a mystery with a romanctic paranormal romance. Magical elements intertwined with adventure and danger. Character's chemistry is sweet and spicy. A entertaining listen.
Addison Barnes naration was smooth and concise. Her tone followed characters emotions and each were given their own voice.

This was a solid shifter story. This book is part of a series but it can be listened to as a standalone. There was plenty of steam and the story was very interesting.

It was ok, pretty standard alien romance. Got sick of the word brooder pretty quick though. Narrator was maybe a little monotone.

Love a good shifter romance! This story has all the things I love in a good book, stranded together, smart female that can stand on her own to feet, and hot sexy times! This was fast paced and it had my deep in the pages with in a few minutes of listening. I didn’t realize when I grab this book it was part of a series but from what I can tell it’s a stand alone in a series of books. If that makes Sense (smh) any way it was a good book and that narration was on point!

Narrator did a good job. She was a little slow, but gave a clear performance and had some good emotion to her voice. Recommend!

Loved this whole thing! I loved the initial set up of Dmitri finding his mate, Nina, on a plane and struggling not to claim her right away, and one of my favorite scenarios happens when they get snowed in for a bit. Some sexy steam! Then the story goes into a cool story about what Dmitri is involved in; some interesting magical elements, and I of course love the shifter aspect. Some action and danger to be had for both Dmitri and Nina. The chemistry is awesome between Nina and Dmitri; lots of spice and sweetness. He's a sweetie and it's so great how much he supports Nina. Nina is a tough, smart, self-less woman; sometimes she's too self-less, too self-sacrificing, but I appreciated her level-headed thinking. They have a really good rapport. The story went into some interesting directions and I was totally entertained all the way through.