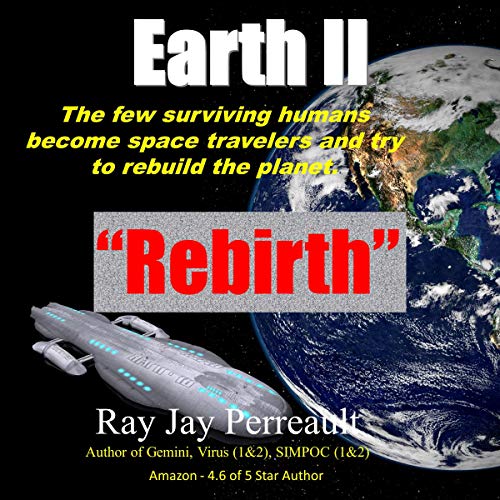 Earth was attacked, and the survivors fought back. After the attack, they found themselves on the horizon of a new Epoch in human history. They became space travelers and on equal footing with alien civilizations around them. Negotiations were held, and relations with both sides of a conflict in a solar system 500 light-years away occurred and Earth was given thousands of space ships and robots as war reparations. They must use the resources to build an Earth space command and prepare for the inevitable return of Julius. The evil computer won't rest until he deals with the two threats to his existence. SIMPOC and the human race. As they build their defense, they explore the universe around them and encounter other alien races. Some may become allies and some may become a threat.

I enjoyed this alot book more than others in the series. it was easy to listen to and hard to put down. was disappointed when it ended.

This is a good series of books but the author should have hired a professional narrator to do the book. He ruined it. He has no idea how to do it . Sounds like a 3rd grader trying to read it. If I could get my money back I would.

After most humans have died from an alien virus, the few left try to rebuild. Complications include corrupt politicians, rogue military units, religious cults, and space aliens. This is warfare in the future that feels plausible. I was gifted this audio book from the author.

Simpoc the thinking computer and it’s human allies/charges have taken to space and confronted the invaders. This takes them to a middle ground and earns them a jumpstart to the stars. They will have to use this to solidify their place in the cosmos, they will find allies and enemies And must prepare for an inevitable rematch with simpoc’s arch nemesis. I have read/listened to and truly enjoyed many of ray’s stories. They harken back to the days of pure science fiction and may not be everyone’s cup of tea. I highly recommend trying them out and giving him a chance. They are a spectacular array of stories. Get the first of the simpocs books before grabbing this one. His stories that tie together are best read/listened to in order. This will allow you to better enjoy the intricacies and details of the stories. I was voluntarily provided this free review copy audiobook by the author, narrator or publisher

Series Getting Better with Each Book

This series has been an interesting concept from the first story. In each installment, the authors storytelling skill, and therefore the story has grown noticeably. He even started narrating them himself which may have helped him in this process. He really has become acceptable at the narration although he is not a pro and it shows. This story has made getting through all the prior installments worth it for me. I really did like this one. I am getting to know the characters better and can certainly relate well with some.
Overall I have to say that Ray Jay Perreault has a style all his own but he can write good Science Fiction.