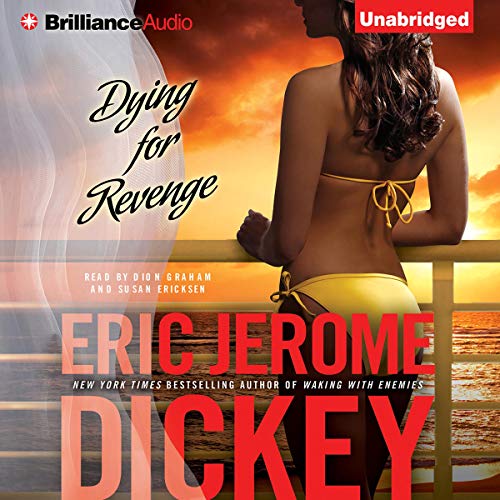 International hit man Gideon never misses his target, but when a job in Detroit goes bad, he should have killed his client - a cold-blooded woman who hired him to kill her husband - when he had the chance. Now the city's mayor and with money and power to spare, this woman will stop at nothing to see that Gideon gets what he deserves.

Gideon soon finds himself in the crosshairs of two hired assassins: a seasoned killer known as El Matador and his voluptuous but ruthless wife, who dons Manolo Blahniks for even the dirtiest jobs. But when Gideon proves himself an impossible target, the lady from Detroit sets her sights on those closest to him.

On the exotic island of Antigua, Gideon enlists the help of his friend and fellow assassin Hawks to square off against his deadliest adversary yet. Amid palm trees and white sands, sparks and bullets fly as Gideon must outsmart and defeat his pursuers before it's too late.

Featuring Dickey's trademark blend of passion and suspense, Dying for Revenge is a pulse-pounding and deliciously sexy thrill-ride through a Caribbean island paradise.

What listeners say about Dying for Revenge

Another great read from one of my favorite authors. I was so pleased that the main character became human and not just a killing sex machine. I enjoyed the way the loose ends were tied up. I have to agree though, the female obsessed with shoes and Sex & the City was a bit much, but overall, I loved it and highly recommend it.

I couldn't stop listening. Excellent from start to finish. This series needs to be a movie!!

Gideon is so cool.

Where does Dying for Revenge rank among all the audiobooks you’ve listened to so far?

I've listened to the other books in this series in order and I enjoyed continuing this story line.

Gideon, he is complex, driven and he has a goal.

Have you listened to any of Dion Graham and Susan Ericksen ’s other performances before? How does this one compare?

I have listened to Dion Graham, he's excellent. I like his voice. Can't remember if I've listened to Susan Ericksen before, but she is not bad at all.

More than likely the book title Dying for Revenge and Getting it.

First, I love the character of Gideon. He is truly one cool and very sexy man! Dion Graham has the perfect voice for narrating this book and character. I forgot how entertaining audio books are until I put my earbuds in and was immediately immersed in the smooth and sexy narration by Mr. Graham and was super engrossed in the suspenseful story and its characters. The only times I cringed during the story was when the narration was handed off to Susan Ericksen. Her voice was like that of fingers on a chalkboard and her delivery was over the top and exasperating. If it wasn't because I needed to hear those chapters for the sake of the story, I would have completely passed thru them. In the future, I will definitely think twice before listening to any book she narrates. It had better have a damn good plot and storyline.

I read this book without reading the first two of this series and I think this was a great book. Gideon is a phenomenal character. Dickey is truly talented.

It wasn't as good as the first two in this series, but it was good, and had me looking forward to the next book.

I liked the book but I thought the male reading for the female characters was annoying. .. everytime I heard him read for a Hawks ... or the other Character I felt like it was a homosexual man... the story was good though but no need for me to read the first 2...

I live for a great story that pulls me into it.

Warm voices in my ear. Takes me to a place that is unknown. But I feel like I have been there. Pull me inside your mind. Ravage me show me your world. This is what this book gave me. Body warm mind Racing and chills over my spine and panties wet. You took me to your world and I love that thank you. Eric Jerome Dicky

I couldn't get enough. What a powerful book to listen to. Dion and Susan did a great job with the narration!

OMG, I love these books, lol. I can't get enough. They keep me captivated the whole way and the narrator is great!