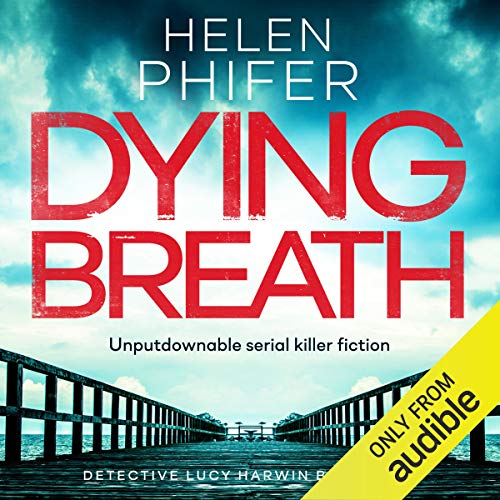 By: Helen Phifer
Narrated by: Alison Campbell
Try for £0.00

Take a breath. Pray it’s not your last.Just a few months after a terrifying case that nearly took her life, Detective Lucy Harwin is back with her squad in the coastal town of Brooklyn Bay – and this time, she’s faced with a case more horrifying than anything she’s encountered.

Along with her partner, Detective Mattie Jackson, Lucy is investigating what appears to be a vicious but isolated murder; a woman found bludgeoned to death on a lonely patch of wasteland. But when a second victim is discovered strangled in an alleyway, then a young family shot in their own home, Lucy and the team must face the unthinkable reality--a killer is walking the streets of their town.

While Lucy and the team try to find the link between these seemingly unconnected murders, they uncover a disturbing truth--these murders are replicating those carried out by infamous serial killers. Lucy must get to the killer before he strikes again. But he’s got his sights on her, and is getting ever closer… Can she save herself, before she becomes the final piece in his twisted game?

What listeners say about Dying Breath

loved this story. love all the characters. A great author. I will read more of her work

I loved this book actually, it kept me on tenderhooks throughout. Thinking it through, the characters could of been developed further but I would still award 5 Stars.

Another fantastic read. Lucy, the main character is gutsy, loveable and tough. The twist at the end was very well thought out. I have read every book by this author, and they are all riveting. The narrator Alison Campbell, is very good relaying the characters extremely well. Can't wait for the next book.

Reader tries to add drama when it’s unnecessary. It’s annoying that everyday statements are said with breathless excitement.
Also, her constant emphasis on the wrong words is distracting cos you have to rewind and re-say it in your head properly - ‘He said it was HIS fault’ means something different to ‘He said it was his fault.’

I really like this author's first two books except for one thing, which is why I'm only giving this 3 stars. In both books, at the moment the villain is revealed, the "brilliant" detective's IQ drops to - 6 and she bungles on oblivious, allowing the villain to overpower her and put her in mortal danger for the climax. It's so ham-fisted, I've yelled, "Oh, come on!" both times. Frankly, it's infuriating coming from an author who does an otherwise solid job on her stories.

so she is terrified that someone else will attack her in her hine so she let's in a strange man? then is so naive that she just goes to Patrick's house ? with no witnesses or anything?

SO, I read this author's similar series about another female detective (Morgan Brookes) and proceeded to read this one.

Both female leads became instantly stupid towards the end of each book. In every book they get caught by the killer and end up almost getting killed. EVERY SINGLE BOOK. It embarrassing as a woman to read about a female making stupid careless mistakes that are so out of character. These women are supposed to be SO strong and SO much smarter than everyone else. They are, until the ending of the books. That being said I did still enjoy reading the books, I'm a sucker for a murder. My only other issue with this book, is that in this author's other female lead detective novel (Morgan Brookes) the bad guy was a cop too! SO not only are both female detectives interchangeable besides minor character details, in both series one of the books was about a killer cop. Maybe the author is lacking in ideas? Maybe she thinks no one will notice? Maybe she thinks having the cop be a killer is SUCH AN AMAZING TWIST it needs to be repeated. Hmmmm.. We'll never know..

Lucy and friends make for a good book and the narrator is awesome, she makes the story come alive. Ready for the next episode of DI Lucy Harwin. Thanks to Hrlen Phifer for great stories and Alison Campbell for wonderful narration.

Getting tired of Lucy’s 9 lives. How many times can one cop almost die? Not sure I can listen to another of Lucy’s near misses.

Good second book in the series

I liked this better than the first book. Lucy is still going off on her own but that’s Lucy. Her team has developed. An old friend/nemesis comes back to join the team causing hate and discontent.

They have several murders to solve and we, the readers, know of several potential perpetrators. The only thing is, we don’t know who they are NOW. Via flashbacks we learn of these people and we always have him/them in mind without knowing how, if at all, they fit in.

My review of the first book in the series mentioned that the story called to mind other books in the genre I had already read. The major plot line and ultimate villain in this book were pretty much the same as a book I finished recently.

The ending was abrupt.

Frankly, I liked this book. The narration was well done. This is a series I will continue to read.

Still good but I was almost identical to the 1st book. That was disappointing. Characters were still good book was well written.

This book was amazing. I love how the killers plot turned out and who it was. If you love thrillers, you will enjoy this book.

The series is listed out of order!
Don't let that put you off. It's a good series. Helen Phifer is a good serial killer author. I hope she continues the series. The narrator is also good. She makes the character voices different without being annoying. I never lose track of who is speaking.

Great book but I just think Alison Campbell could read me the dictionary and I would listen. My favorite narrator. I do have a question on the ending about a character but can't ask without doing it for others! Maybe I just missed something.