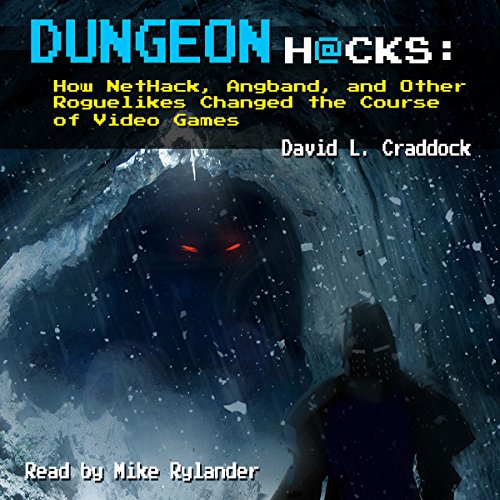 How NetHack, Angband, and Other Roguelikes Changed the Course of Video Games
By: David L. Craddock
Narrated by: Mike Rylander
Length: 6 hrs and 22 mins
Categories: Non-fiction, Technology
5 out of 5 stars 5.0 (1 rating)

In 1980, computers were instruments of science and mathematics, military secrets and academia. Stern administrators lorded over sterile university laboratories and stressed one point to the wide-eyed students privileged enough to set foot within them: Computers were not toys.

Despite their visual simplicity, roguelike games captivate thousands of players around the world. From the author of the best-selling Stay Awhile and Listen series, Dungeon Hacks introduces you to the visionaries behind some of the most popular roguelikes of all time and shows how their creations paved the way for the blockbuster video games of today - and beyond.

great topic, well narrated. love Angband and this book reminded me why! definitely worth a listen.

A nostalgic look at an accidental classic

Simply amazing. I've loved these games for many years, but had no idea how interesting the history of their creation would be. Any person calling themselves a gamer should listen to this book and try these games.

I enjoyed it. I'm a big NetHack, FTL, Rogue Legacy fan and if you know what those things are you'll probably enjoy it too.

Awesome insight into the history of Roguelikes.

I still have a few chapters left but loving this book and the narration is very well done. Will update with full review once done.