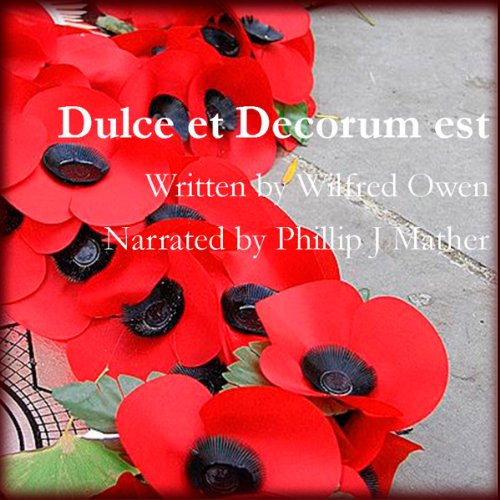 By: Wilfred Owen
Narrated by: Phillip J. Mather
Try for £0.00

The narrator pledges to donate 50% of his proceeds to The Royal British Legion Poppy Day Appeal - please support. Wilfred Owen’s famous poem was written in 1917 during World War I. Dulce et Decorum Est describes the horrors of the front lines and the gruesome effect of a gas attack. It is a rebuke to those that would glorify war. The title, taken from Horace, can be translated as “It is sweet and glorious to die for one’s country”. A powerful piece. Those who glorify war should listen to this, and those who send young men to war also before they sign the order. A masterful performance by Phillip J. Mather.

A Voice Against The Propaganda Of War As Glorious

What did you love best about Dulce et Decorum Est?

It is a story-poem, one relating a gas attack aimed at a convoy of tired, staggering soldiers. It was written to counter a line of propaganda which goaded men to join the army and fight.

Dulce et Decorum est means It Is Sweet and Honorable (to die for the fatherland). Wilfred Owen, in his description of the gas attack berates those who would urge men to die in glory. There is no glory in the Great War that Owen had witness and took part in. The death and anguish and dehumanization of the soldiers leaves no doubt as to how awful war really is.

The poem brings home the horrors of war and explains, perhaps, why following the Great War, England and France were so reluctant to fight Germany and chose appeasement instead.

Both the narration and the prose of the poem were spot on.

There is just one scene, that of the gas attack.

The Ugly Glory Of War.

It is worthwhile to listen to this poem and compare it with masterpieces like England To Free Men, which is highly-patriotic. Both are great poems, yet each takes and opposite view of the war.

Where does Dulce et Decorum Est rank among all the audiobooks you’ve listened to so far?

This is the most poignant war poem I have ever read or listened to, written by the greatest war poet of all time, Wilfred Owen. Pressurised by propaganda into enlisting this young man, like thousands of others went to war with high spirits and saw those spirits crushed by the horrors of war.

Like is not the right word. This poem, however, describes, graphically a snapshot of WW1. We all know gas masks existed, we've seen them in museums and heard our parents [if you are my age or older] describe their distribution in WW11, however, somehow their importance has never been so completely portrayed as in this poem.

What about Phillip J. Mather’s performance did you like?

Phillip J. Mather's narration of this poem is amazing, his voice is the perfect vehicle to convey Wilfred Owen's words.

Listening to this, touched me so much that I had to look up Wilfred Owen's biography. I learnt that he, was in fact at the start of WW1 teaching in France, enlisted, then having seen fighting returned to England suffering from shell shock. In September 1918 he was returned to the front line, in October he won the Military Cross, then by a cruel twist of fate was killed near the village of Ors on the 4th November. His parents learnt of his death as the Armistice bells tolled on November 11th 1918...