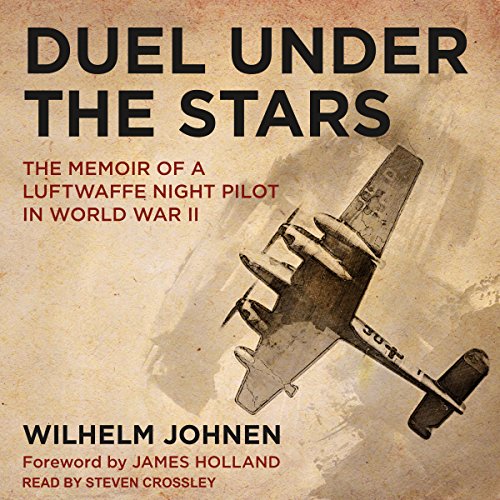 Duel Under the Stars

By: Wilhelm Johnen,James Holland
Narrated by: Steven Crossley
Try for £0.00

Wilhelm Johnen flew his first operational mission in July 1941, having completed his blind-flying training. In his first couple of years he brought down two enemy planes. The tally went up rapidly once the air war was escalated in spring 1943, when Air Marshal Arthur Harris of the RAF Bomber Command began the campaign dubbed the Battle of the Ruhr.

During this phrase of the war Johnen's successes were achieved against a 710-strong force of bombers. Johnen's further successes during Harris's subsequent Berlin offensive led to his promotion as Staffelkapitan (squadron leader) of Nachtjagdgeschwader and a move to Mainz. During a sortie from there, his Bf 110 was hit by return fire and he was forced to land in Switzerland.

He and his crew were interned by the authorities. The Germans were deeply worried about leaving a sophisticatedly equipped night fighter and its important air crew in the hands of a foreign government, even if it was a neutral one. After negotiations involving Göring, the prisoners were released.

Johnen's unit moved to Hungary and by October 1944, his score was standing at 33 aerial kills. His final one came in March the following year, once Johnen had moved back to Germany.

What listeners say about Duel Under the Stars

I've read this book, in its printed form, many times. It is fascinating to hear the night fighter story from the other side. But I simply couldn't get on with the voice of the narrator of this audio book. Otherwise it'd have been 5 stars. I think Amazon offer it as a Kindle book, together with the Audible narration add-on, so I'd highly recommend you buy the Kindle version and, maybe, try the add-on narrative. You can always return the narration if you don't like it. The book is well worth reading.

A fascinating and dispassionate account of an intense aspect of WW2. Good to see a German point of view and the evident mutual respect for fellow aviators.

Great book written by a young German after his experiences in shooting down numerous Allied bombers over Germany and occupied Europe. Whilst he avoids politics he is clearly a patriot and a merciless defender of his country in extremes of danger. Shame it is narrated by an Allan Bennett sound-a-like and not one of the many English speaking German actors that could have done this. The translation is often flaky, which, if spoken by a German would have been fine but not when spoken by this incongruous narrator. It is difficult to summon up the image of a steely eyed merciless defender of the Riech when spoken in a soft, ever-so-nice, Yorkshire accent that sounds like it would excel at reading Winnie the Pooh. Sorry if this sounds harsh. Defiantly worth a listen as the story is fascinating and enlightening but dear me Piglet, Steven Crossley is no ice cold assassin of the night skies.

the naration ruined it just terrible , it was really bad it ruined a really good book , the story was quite a good story in general, spoilt by the naration

Well read, easy to understand on any level of listener and very informative.

A solid description of the evolving cat and mouse between the Luftwaffe and Bomber Command.

I highly recommend this title.

A good view from the other side

Ive not listened to many accounts from the Luftwaffe side of the war and it is a good story of the challenges they faced.

The best pilots in history

Another incredible and chivalrous account from a brave Luftwaffe pilot of the night fighter wing.

I enjoyed this audio book a great deal. It is wonderful to get the view from the German side.

Regarding narration, I would prefer if the book was read by a native German. The English accent of the narrator was off putting.

Many thanks for this work.

love this account of German Nightfighters. i did find it hard to stay in the story as it is narrated by an English men. still very good

Interesting memoir from a different perspective

We always read memoirs from Allied pilots but few from the other side. So, it was interesting to read one from a Luftwaffe pilot. The stories in this book were well written and quite engaging. It was sad to hear how the author lives through the war but, throughout the book, eulogizes many (most?) of those who he fought with. It was also touching to hear the author's sympathy for some of his opponents.

James Holland's introduction (you should listen to some of his books, too, BTW), puts this book into the same class as First Light, which was written by British fighter pilot Geoffrey Wellum. First Light was extraordinary and I'm not sure this is exactly up to its level, but it is close.

I guess the one thing I would like to have heard a bit more about would have been the author's reactions to the Nazi policies. At one point he details how his own family got caught up in them but, given that this was written after the war, it would be interesting to hear how he, and his fellow Luftwaffe pilots, really felt about the atrocities and how the war was executed. I don't think it should be a major focus but it was probably due a paragraph now and again.

Anyhow, overall, this is a very worthwhile listen for anyone who's into WW2 aviation.

The use of night fighter planes is one of those rarely told stories of war. This detailed story of a German pilot, flying, hunting and destroying enemy planes at night is a very worthy read. The training, techniques, equipment, and excitement is all here.
Don't hesitate to purchase this book. You'll be glad you did.

Need I say more. The story is OK, but it is very difficult to stick with this audio book with its constant use of British slang and the narrator’s accent. If it wasn’t the only new audio book I had on my phone I would not have suffered through it. Would immediately jump 3 stars if British slang is removed and a English speaking German narrated it. I’ve read and listened to many Luftwaffe books and pretty sure “machine” and “crate” went out with WWI.

I didnt like the narrator but this has alot of good content on Luftwaffe night operations. Wish is had more about his capture and post war life. Overall good

This was a very good surprise of a listen. When I thought of World War 2 aerial. it was more of daylight combat. This certainly opened my eyes to night combat and the challenge that the night fighter pilots must have faced.

One of the things that I did not like is that the book used feets, yards and MPH instead of meters, kilometers or KMH which you would thing would have been used being a German pilot. Another thing I didn't like was that the memoir starts early in the war and ends in 1945. There was no information of his life before or after his war time service which was a bit disappointing.

One of my favorite parts of the books was when his plane got damaged and had to bail out. He deployed his parachute but was hanging in the trees. He didn't know how far down he was so he dropped his knife to hear a sound but didn't. Morning came and he realized that he was 3 feet off the ground which his fellow comrade had a good laugh about.

Overall, this was a great memoir.

What an insight into the operations of the 'ememy'

...there is a bit lost in translation but for the most part...a great reproduction in english

another excellent book telling history, as it was

history is written by the winners of war, even if its not true. this book tells real history, as it happened and not manipulated.