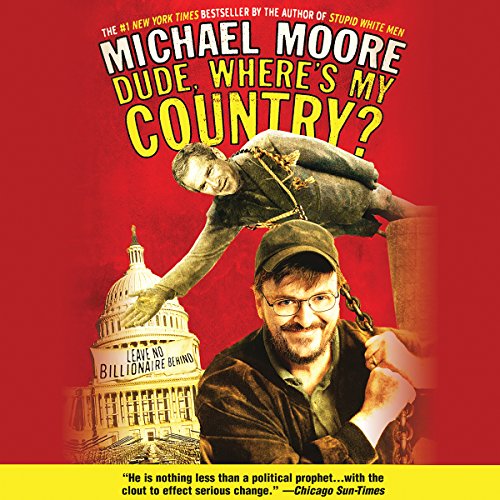 He is the scourge of Stupid White Men everywhere. He's taken on fat cats, gun nuts, lying politicians. The Guardian describes him as "a wake-up call, a kick in the mental backside". And now Michael Moore is back, daring to ask the most urgent question of these perilous times: Dude, Where's My Country?

Michael Moore is on a mission in his new book: regime change. The man who slithered into the White House on tracks greased by his daddy's oil buddies is one of the many targets in Mike's blistering follow-up to his smash number one Stupid White Men, the biggest selling nonfiction book of the year. Now no one is safe: corporate barons who have bilked millions out of their employees' lifetime savings, legislators who have stripped away our civil liberties in the name of "homeland security", and even that right-wing brother-in-law of yours (yes, we all have one) who manages, year after year, through his babbling idiocy, to ruin Thanksgiving dinner.

Fearless, funny and furious, Michael Moore's new book is the call to arms we've all been waiting for, the kind of book that comes along once every so often that rallies citizens with humor and insight and changes the course of the country.

Excellent - a must read

Michael Moore is making no secret of his view on the current administration. However, he builds his case based on a series of facts and relevant questions that we have not heard a clear answer to from the people in power.

Agree or disagree with Moore - you should still take the time to listen to what he says and make up your own mind. The book is entertaining and easy flowing and well read.

I am politically to the left - this is just bad

Don't dismiss this as simple political disagreement disguised as a review. I agree with most of Moore's politics and still found this book painful. Just for the record, I love Al Franken, Moore's previous book was fine, and I certainly wonder where my country is.

What's wrong with this book? It is not all that entertaining. In fact, it was so tedious that I worried about dozing off when listening in the car (though much of the blame there goes to the near-monotone reading). That would be acceptable if it were informative, but there is basically nothing there that someone who actively follows the political news (not including Fox, of course) does not already know. If you don't know it, get a book of investigative reporting - it will be more accurate and thorough and no less entertaining.

The book contains a fair number of factual errors (I am a professor and have some expertise in some of the matters discussed) and is needlessly and embarassingly demagogic in places. There are so many good criticisms of the current powers that be, so why make silly weak ones. On top of everything else, this is the worst reading of an audiobook I have heard. The reader takes all the character out of what should at least be lively prose and doesn't even know how to pronounce all the names of the major political figures mentioned.

41 of 47 people found this review helpful

moore speaks free and frank...he must have been in a rush, when writing this book, because many passages are not as sharp as one would expect from him...none the less m.moore spins the post 9/11 events in a fresh angle that serves as a healthy counterbalance of current white house propaganda.

To be a republican you must fit into one of 3 categories: Naive, Ignorant, or Corrupt. Now no republican will admit it, but that's because they aren't willing to listen to reason. Michael Moore will never convince anyone of the truths he exploits because the people who read his books already understand. Unfortunately, the people who need to read his books will never accept it because like I started out ... they fall into one of three categories. Which one are you in? If you aren't in one of the three categories above then you must be a Democrat or unaffiliated. Opposing the war in Iraq is not the same as opposing the U.S. or our military. Quite the opposite. Bush and Cheney benefited most from this war. They got into politics for power and money and that's exactly what they got. Let's not fool ourselves into believing that this war is about protecting freedom and wiping out terrorism. I hope Michael Moore's books and movies can convince nonvoting democrats to vote Bush out of the White House and hopefully this time, he won't be able to buy back the electoral votes like he did 4 years ago.

18 of 21 people found this review helpful

Entertaining at first, then repetitive

After enjoying considerably 'Lying Liars', I was looking forward to Moore's book. My first disapointment was the fact that it is not read by Moore. Surely, I could have caught that when I read the book's description, but given Moore's documentarian background, I assumed it as a given. Initial negative impression aside, I did enjoy the first half quite a bit. However at some point after that, Moore derails in his rhetoric and instead of providing examples for his criticism, he just criticises. Somehow, I found the latter not nearly as enjoyable as the former.
In the end, I'm still glad to have bought the book, but it wasn't as good as I expected it to be.

I generally enjoy Michael Moore. His extreme left viewpoints are a refreshing balance to the extreme right opinions I see and hear every day. I appreciate the fact that he criticizes with humor, and though I do not agree with him on everything, I think he has some good points to make.

The problem with this book, however, it that they could not have hired a more mudane, boring, over enunciating narrator. I swear every joke and clever quip loses every ounce of humor with this guy reading it. Michael should have read it himself.

Good, but take with a grain of salt!

Now don't get me wrong, I'm forever grateful for Michael Moore's existence. His body of work (perhaps with the exception of the TV Nation episodes that devolved into mindless shock-jockery) is always thought-provoking, unflinching, subversive and disturbing.

That said, 'Dude, Where's My Country' is not nearly as good as 'Stupid White Men'. Much of Mr. Moore's invective still strikes home and awakens in the reader a sense that all is not well in America's halls of power. Nonetheless, the book often feels like an under-researched, albeit passionately felt, diatribe.

I got the sense, as I listened, that Moore wanted to get the book out in a hurry so he could use his readers as a large focus group for his next film.

All in all an entertaining, incisive listen whose "facts" should not necessarily be taken as gospel.

Bitter ranting on a wide range of topics

I'm generally a fan of Michael Moore's documentaries, this is the first of his books I've read (listened to). If you're of a like mind to Mr. Moore, you'll find this covers ground you already know and share offense about. In that case it's just not entertaining or informative. The tone of this book is consistently bitter and harsh, with none of the humor I normally see in Mr. Moore's films. The narration doesn't help any either. I actually gave up on the book about 3/4 of the way through. I'd recommed Al Franken's "Lies and the Lying Liers Who Tell Them" instead. That book is more focused, and is consistently funny and informative.

23 of 32 people found this review helpful

A Solid Read, but with an Amatuer Feel

Not nearly as good as "Stupid White Men," this is still an entertaining, insightful, and thought-provoking listen. At times, Moore's writing-style feels amatuerish; his sentence-structure is at times awkward to listen to, but perhaps that is also part the Narrator's fault, whose recycled, passionate-less, and unvaried tones almost suggest a lack of intelligence.

But I digress... If you're into political books, this should definitely be on your reading list. Witty, Classic Michael Moore. And, to disagree with another one of the reviews on this page, Moore does, actually, give a venerable plethora of suggestions on how one can go out and do his or her part to change what is a less-than-satisfactory status quo.

8 of 11 people found this review helpful

Yes, I have read this book. And, yes, I also like Franken. But Moore is clearly the KING of political satire. The scary thing, however, is just how much Moore seems to know about the "real" politics that are going on while most of the public sleeps. Just how close is Bush to the Saudis? Did Bush profit from the "war" in Afghanistan and Iraq? Why did Bush rush to help the Bin Ladens leave the US within hours of 9/11? Moore seems to have tapped into frustration most people have with modern day politicians, yet holds out persistent hope that we (the people) will wake up and smell the bulls***.