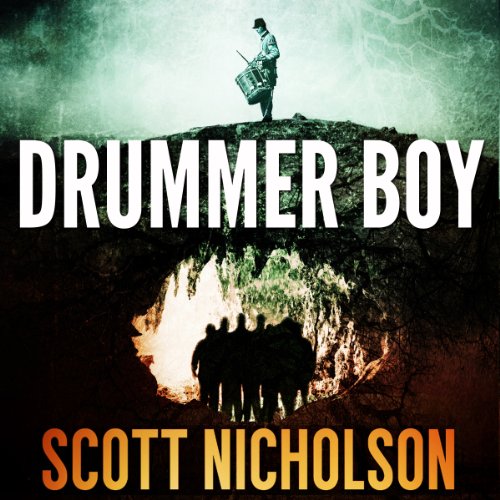 On an Appalachian Mountain ridge, young Vernon Ray Davis hears the rattling of a snare drum deep inside a caveknown as "The Jangling Hole", and the wind carries a whispered name. According to legend, the Hole is home to a group of Civil War soldiers buried by a long-ago avalanche. Everyone, especially Vernon Ray's dad, laughs at him...because he's different.

On the eve of an annual Civil War reenactment, the town of Titusville prepares for a mock battle. But inside the Hole, disturbed spirits are rising from their dark slumber, and one of them is heading home.

And Vernon Ray stands between the battle lines of the living and the dead, caught between a world where he doesn't belong and a world from which he can never return...

From the author of The Red Church and Speed Dating with the Dead comes a poignant coming-of-age tale of supernatural mystery and suspense.

The plot and characters were well developed and be

Dummer Boy is the second in a series following The Red Church. The setting is in Titusville – somewhere on the Appalachian Mountain Ridge. This area is deeply committed to its historic past of battles during the Civil War. Residents of this town are poor and stereo-typical back hills redneck types. The story centers around the civil war and it’s victims of long ago who still can be found near the Jangling Hole.

Several people have fallen victim to the Jangling Hole and it’s spirit inhabitants. The Hole is stirred up when the mountain is slated to be a huge housing development. The spirits manifest and visit several residents who have ties to the long dead men. Within these residents is a young boy – Vernon Ray Davis who does not belong in the world of his father (although he longs for it) and does not belong in the world of the Jangling Hole residents.

Vernon Ray Davis and his friends have multiple encounters with these spirits but ultimately, no one can save Vernon. He is faced with joining a world whose inhabitants have accepted him and given him what he has longed for – respect, and a coveted role of drummer boy or continue in the world where his father mocks and openly hates him. the jangling hole and it’s residents resonant with the rat-a-tat of the snare drum from the dead drummer boy who needs to be replaced.

Officer Littlefield who was predominant in the first book – The Red Church – is not as involved as he is always a day late and a dollar short.

The book had some harsh language but given the demographic it is written about, it only makes it more realistic. The plot and characters were well developed and believable.

The narrator, Milton Bagby did an excellent job of reading the book. He spoke clearly and concisely.