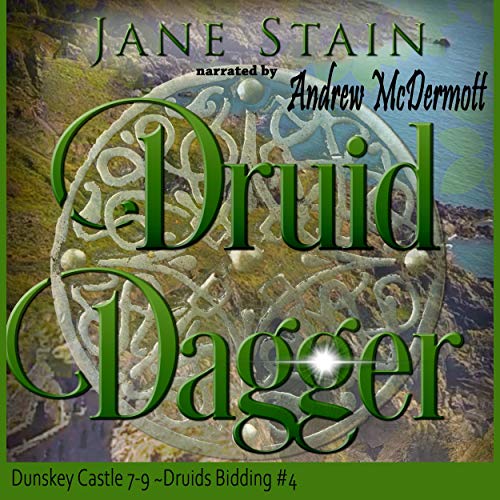 By: Jane Stain
Narrated by: Andrew McDermott
Try for £0.00

Lauren meant to take her friends on a time-travel adventure, but the druid in her dagger wouldn't let her tell them. Leif had assumed Father's duties as Laird of Cresh Manor four months ago, when the fever took both his parents.

Druids had sent the fever to his town, so the people said. Druids from the mysterious Druid castle to the North. They also said Druids sent the three beautiful women who had wandered into town, but Leif didn't believe a word of that.

‘Druid Dagger: Dunskey Castle 7-9 (Druids Bidding Book 4)’ is a box set collecting together three individual time travel romances which follow on from each other (‘Leif’, ‘Taran’ and ‘Luag’).

Galdus, the nasty ancient druid whose spirit inhabits a rune-scarred dagger, is back – this time accompanying Lauren who tricks her friends Jessica and Katherine into accompanying her on a time travel mission back to 15th century Scotland. Leif (Laird and captain of the local militia) offers the three friends shelter at his home and his protection. Taran, his brother, also lives at the manor house, and so does Luag who left his own clan as a young man and now trains the men in the militia in fighting skills as well as going into battle alongside them. Voilà: the leading lassies and laddies of the three romances. Besides the time travel and the romance, there is humour, action, adventure, suspense …

No, it is not in the same ballpark as Outlander. Diana Gabaldon is always going to be my favourite time travel romance author and her work is a masterpiece. So what? It didn’t stop me enjoying this box set – it’s just different.

As always, Andrew McDermott does a sterling job with the narration and it makes for a delightful listening experience.

By far, this was the best in the series and the story was brought to life by narrator Andrew McDermott. It was romantic, yet respectful. Stain & McDermott make a great team! They should consider working together on more projects in the future.

wonderful. loved everything about this box. thank you. look forward to others written by this author.

Wonderful continuation of the series!

I enjoyed this story a lot. I have enjoyed all the stories in this series so far, so it couldn't go too far wrong for me! The characters are well developed and complex. The story world is beautifully detailed and so realistic it pulls you into the scene. I absolutely love Andrew McDermott's narratives and would willingly listen to him narrate the dictionary! In this case, the Irish accent really accentuates the story and helps you fall into the world much deeper than just reading it would! I highly recommend both this book and other works by this narrator!