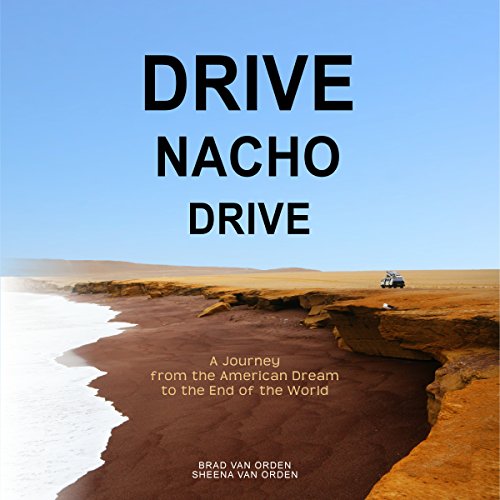 On an afternoon just like many before it, Brad Van Orden sat at his desk. When a coworker meandered past his window, Brad succumbed to an impulse and blurted out the most outlandish thing he could think of: “Hey Steve, let's drive your hippie bus to Tierra del Fuego.” This prompted Steve's halfhearted response: “I don't think so.”

But this got Brad thinking: What if we just dropped everything and left? Isn't there more to life than this? He messaged his wife with a question: “Want to do this?” to which she immediately responded: “Yes!” They clearly had no idea what they were getting themselves into.

Drive Nacho Drive tells the hilarious and sometimes harrowing story of what happens when Brad and Sheena Van Orden trade in the American dream for a year on the roads of Central and South America aboard “Nacho”, their quirky and somewhat temperamental Volkswagen van.

As a result of questionable decision-making skills and intermittent bad luck, Brad and Sheena repeatedly find themselves in over their heads. Whether negotiating cliff-hanging roads in rebel territory, getting caught illegally smuggling a transmission in a suitcase over international lines, mounting a stealth mission to steal Nacho back from a deranged Colombian auto dismantler, or clinging to the side of a vegetable truck while descending a 16,000 foot Andean pass, there seems to be no limit to the predicaments that these two can get themselves into.

With Drive Nacho Drive, the Van Ordens deliver a thoughtful, hilarious, and mouthwatering depiction of adventure and misadventure on the Pan-American highway - one that will leave you simultaneously shaking your head and holding your sides, while asking yourself, isn't there more to life than this?

It starts off a little slow and Bad takes a bit of time to get into the flow but once they set off he really gets going and you are caught up in their adventure.

100 things to do before you die

Goal oriented, bucket list approach to travel. Not for me, I prefer more in depth encounters and character interaction and people enjoying the journey more and destination less.

Starts very slowly, but worth it in the end

Most of the early book is, the van broke down... mechanics were incompetent...roads were bad.

Just when I started warming to the narrator, his wife took over, and she tends to be very wooden in her performance.

They finally got somewhere and I started getting interested just as the story ended.

meh it was alright. interesting parts. wished it would have involved his lady more. decent.

interesting story, and entertaining and enjoyable, bit the authors shared the narration and it was difficult to get through. it would be much better if a professional narrator was used.

I'm very jealous of Brad and Sheena of their adventures through South America! I will definitely download their sequel! I caught myself laughing out loud many times and a profound feeling of inspiration has fallen upon me. I love the soul and the relationship of the authors and their beloved Vanagon and especially the metaphors used to describe its struggles. FYI for people considering this audiobook, this book reads kind of like a diary more than a novel.

Nice job Brad and Sheena you do us all proud!

The first of many 5 star reviews I'm sure.

I cannot say enough about how much I enjoyed this book! The book was very inspirational as I am very close to departing on a much shorter version of a trip in my van this summer to Panama with my youngest son. I am very happy to be the first person to review, here on Audible, such an awesome book!

Enjoyable story! (Didn't appreciate the jab about Christianity being superstition though). Overlooking that, it is an fun and funny trip across Latin and South America.. The details really make you feel like you went with them! Recommend!