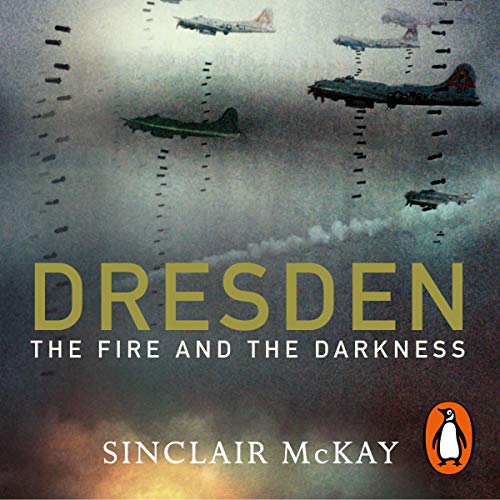 The Fire and the Darkness
By: Sinclair McKay
Narrated by: Leighton Pugh
Length: 13 hrs and 49 mins
Categories: History, Second World War
5 out of 5 stars 4.8 (12 ratings)

In February 1945 the Allies obliterated Dresden, the 'Florence of the Elbe'. Explosive bombs weighing over 1,000 lbs fell every seven and a half seconds and an estimated 25,000 people were killed. Was Dresden a legitimate military target or was the bombing a last act of atavistic mass murder in a war already won?

From the history of the city to the attack itself, conveyed in a minute-by-minute account from the first of the flares to the flames reaching almost a mile high - the wind so searingly hot that the lungs of those in its path were instantly scorched - through the eerie period of reconstruction, best-selling author Sinclair McKay creates a vast canvas and brings it alive with touching human detail.

Along the way we encounter, for example, a Jewish woman who thought the English bombs had been sent from heaven, novelist Kurt Vonnegut who wrote that the smouldering landscape was like walking on the surface of the moon, and 15-year-old Winfried Bielss, who, having spent the evening ushering refugees, wanted to get home to his stamp collection. He was not to know that there was not enough time.

Impeccably researched and deeply moving, McKay uses never-before-seen sources to relate the untold stories of civilians and vividly conveys the texture of life in a decimated city. Dresden is invoked as a byword for the illimitable cruelties of war, but with the ever-lengthening distance of time, it is now possible to approach this subject with a much clearer gaze, less occluded with the weight of prejudice in either direction, and with a keener interest in the sorts of lives that ordinary people lived and lost, or tried to rebuild.

From general and individual morality in war to the raw, primal instinct for survival, through the seemingly unstoppable gravity of mass destruction and the manipulation of memory, this is a master historian at work.

The harrowing but balanced story of Dresden

The author balances detail with broad overview, and tells the story of the bombing of Dresden through the eyes and experiences of many of its citizens. The audio book is read clearly and well.