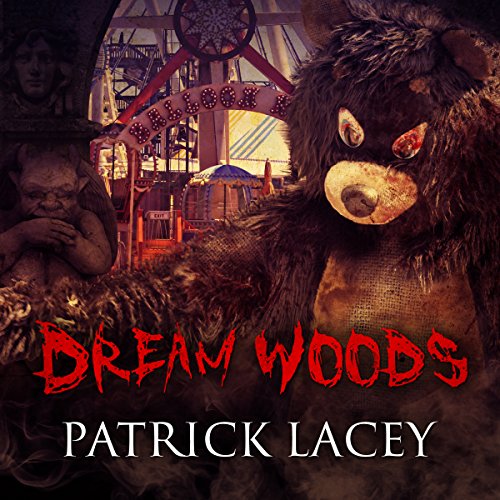 When Vince Carter takes a shortcut to work, he notices a billboard that nearly sends him into an oncoming van.

The ad is for Dream Woods, New England's answer to Disney World. It closed decades ago, but now that it's back in business, Vince is eager to take his whole family, hoping the magic he remembers will save his failing marriage.

His wife, Audra, isn't so sure. She's heard the rumors of why the place closed. Murder. Sacrifice. Torture. But those are just urban legends. Surely there's nothing evil about a family tourist attraction.

The Carters are about to discover that the park's employees aren't concerned with their guests' enjoyment. They're interested in something else. Something much more sinister.

Where does Dream Woods rank among all the audiobooks you’ve listened to so far?

It was enjoyable and different from the standard horror stories. I would say it was up towards the top.

Vince. I liked how he was trying to fix his family and reconnect with his past. I enjoyed how he was a punk rocker who finally decided to settle down and become a part of the machine that he previously spoke out against.

As always Joe does a fantastic job. At this point if his name is attached to a book I want to listen to it.

The story line of Vince working to fix his marriage. Given his past I felt that it was a very realistic issue and I sympathized with him.

Lemme tell you... I'm slowly making my way through Joe Hempel's library of narrated works because his voice is a joy to listen to. He's great at urban fantasy but so far where he really shines is horror for me. He's got this quality to his voice, which is so unique. It's like he's sitting at a campfire, gesturing for all of us to 'Come round, come round, I've got a story to tell you', and then proceeds to act out the story in a way that's terrifying: hushed, urgent, spooky, and wonderful. Listening to Mr. Hempel narrate horror is like revisiting those old childhood campfire ghost stories. I cannot recommend him enough.

His voice was a perfect fit for this tale. The basic summation of the story is this: a father sees an ad for "Dream Woods", a themepark he'd attended when he was a child. In an attempt to make his family happy (and hopefully saving his marriage, as his wife is teetering on the edge of leaving him), he books a family vacation to a place he loved so much as a child! Except... well, time colors all memories, and while he thinks he remembers some maybe spooky things happening there, in reality, a LOT of people went missing from this park. One survivor of the horrors encountered there also sees an ad for Dream Woods, and is determined to go there to stop the dark forces behind the dire theme park once and for all.

Interesting premise, and the first half... I was glued. I seriously was glued to it. The tension and suspense was so thick you could cut it with a knife and it had the hair on the back of my neck standing on edge. Why? Because it took simple things and twisted them *just* enough to make them terrifying. Why I can't give the story 5 stars is that once the splatter started, it lost that tense quality for me and became more... banal. So, maybe I'm jaded when it comes to horror. Maybe I need more blood, guts, gore, or what-have-you to really get spooked when it comes to splatter... but the first half of this audio book where it WASN'T gory was the scariest part!

Still would heartily recommend this for a listen. You won't be disappointed!

A creepy amusement park filled with evil creatures? I'll take one ticket please! This is the first of Mr. Lacey's stories that I have experienced and I must say it was a blast. The story mainly revolves around one family's horrific experience at a creepy amusement park with a dark past. This fast paced story features interesting characters and a wonderful locale. Being a huge theme park fan myself, the idea of an evil amusement park instantly drew me in and I enjoyed the ride to the very end. I'll definitely be looking into more of Mr. Lacey's work.

This book was narrated by the talented Joe Hempel. I think everything I've heard by him has been horror stories, and I have yet to be disappointed. He has a relaxed style, and I think that actually adds a bit more creepiness to the stories he narrates. I may have said it before, but his narration reminds me of someone telling me a ghost story around a campfire, which I enjoy quite a bit.

This funky little horror book is now one of my favorites. 'Scream Woods' begins in an unassuming way and I felt for all of the characters immediately (even though they aren't the *best* people ever). Without giving away any spoilers, I'll say that this book is a peek into what might be beneath beautiful things that we don't necessarily understand. Like Disney world - it's all magic, right? You can't see the strings that are operating the puppets and maybe the puppeteer is sinister. If you like horror/fantasy and a good solid fight until the end, then this book is for you. I absolutely loved it!!! Hempel is a rock solid narrator, as always.

I tried, but I just could not get into this book. I had about an hour left to go and finally decided life is too short. The narration is great, but the writing is amateurish and full of things that don't make sense. Yes, it is creepy, but the execution is just too poor for me to deal with. The neatly packaged, rehearsed way the characters tell each other their life stories. The way the father goes on and on to everyone he meets about how the amusement park is the best place on earth. This is just not the way people communicate with each other. It is, and feels, completely contrived.

Then you have the supposedly typical six year olds who lament having possibly shortened lifespans (one of them might live to 60 instead of 80) and go around pondering how *credible* and *archaic* things are . . . really? And the little mistakes, e.g. 'money is no option.' It's object, Mr. Lacey. OBJECT.

Finally, the characters themselves are either completely one-dimensional (like the father, trying to get his wife to love him again and sure the park will fix everything) or totally and unrealistically unlikeable. Seriously, hoping and waiting for the callous and shallow wife to get eventually cut from the book through murder was the only thing I was emotionally invested in. But alas, it wasn't enough to make me finish the book. (And please don't misunderstand, this isn't a spoiler, I'm not saying if it happens or not.)

There are so many better books out there. I would take a pass on this one.

I was provided this audiobook for free at my request by the author, publisher, or narrator and have voluntarily left this review. This in no way affected the opinions I have expressed.

Great book! Excellent narration by Joe Hempel.
This was like listening to a Stephen King novel. It's just the kind of story King would dream up, if he hasn't already. A man sees a sign for a theme park that's been closed for 30 years, saying it is reopening. It was his favorite theme park in the world when he was a kid and he is excited to go back and relive his childhood memories. His family, not so much, but it's a week long vacation. What they don't know is that the park is still closed. But this family and thousands of others are under the illusion that this is real. They meet up with strange employees who know their deepest, darkest secrets and remind them each whenever they are alone. The park was built over a Hellmouth of sorts and the evil creatures running the park need human blood to run the equipment and human body parts for their meals.
Patrick Lacey sure channeled Stephen King when he wrote this one, but it's a lot shorter than King's novels usually are, getting to the story and the point quickly without dragging things out. Well written and believable characters, along with Joe Hempel's narration make this a horrifying thriller that I might just have to listen to again!

I requested this book because the premise looked interesting and because Joe Hempel is the narrator. Mr. Hempel is one of my favorite narrators, he is so good at bringing books to life. As for the story, it was delightfully creepy and tense, like a good horror book should be. It gets a bit gruesome in the last half, but it's a horror book so that shouldn't be a shock. Fans of horror should DEFINITELY check this one out!

Apparently I'm in the minority because for me this book started out slow. Once it picked up, I found I didn't really care what happened because none of the characters were likable. I do agree with other listeners that it is quite creepy and the narration rocks. IMHO, the narration is the best thing about this book.
I received a free review copy in exchange for an honest review.

Dream Woods will take you to the dark places of everything that you fear. It will draw you in and not let go until the end. Joe Hempel is quickly becoming one of my fave narrators with his distinguishable character voices and perfect pacing. I look forward to more from this Author &amp; narrator.