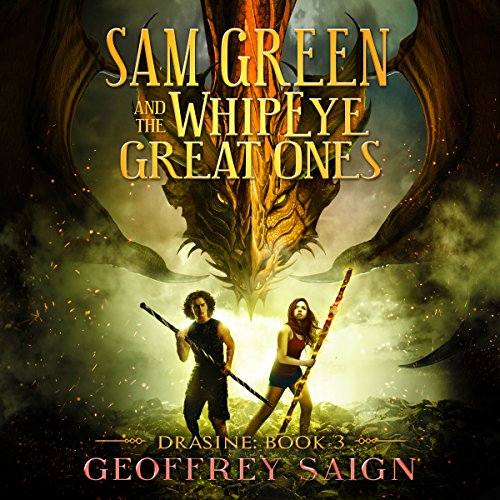 Sam and Jake are battle tested warriors, but nothing can prepare them for the Evil One.

Sam is eager for the attack they know is coming. Yet Jake has grown distant from her and won’t tell her why. Giant Lessers attack and attach a bomb to Jake’s arm. Sam is beside herself, but Jake has a deeper secret worry.

They are blackmailed - capture the magical dragon, Drasine, or Jake dies. Everyone wants Drasine, including the powerful Evil One, who has sworn to destroy KiraKu. Worse, Drasine is protected by a mysterious being no one has been able to defeat.

Sam will do anything to save Jake, but they don’t know who to trust. They are betrayed at every step.

And one of them may have to die to save the other....

Another Winner from Geoffrey Saign!

I've been in audio book heaven since the I listened to the first release from Geoffrey Saign in this series, Book one of this series is Whipeye..

I was really happy and surprised to see book 2 (Gorgon) come out shortly afterward and I was hoping that there would be more sequels. I had no idea book 3 would be released so quickly, so now I'm going to look for Book 4! I hope there is one. I don't want to spoil anything, but Mr. Saign did leave Drasine open for another sequel.

This 3rd release, Drasine is my favorite of the series so far. Saign's characters have depth, wit and personality. While many series seem to fade away after the first book, Saign just gets better and better.

He continues to bring back loveable characters and even his evil villains are kind of fun. They are pretty wacky and that makes them interesting.

Ms. Holladay does a superb job narrating the books. I've started to look for other books she's narrated.
But I have a new favorite author. I'll be watching for more books by this author.

I suggest if you are reading this review that you start with the first book (Whipeye) and listen in order. They are great stand alone books, but you do miss out on a lot of background if you don't listen in order.

Keep them coming and I will keep listening!

Sam Green and the WhipEye Great Ones: Drasine Book 3 brings Sam Green, Jake and Charlie back together but this time they are fighting to save their world and Kiraku from the great Evil One – Gorgon and Maynard’s mentor/partner! Samantha and Jake are moving into dangerous territory … teenage angst along with some fierce and ferocious monsters stalking them.

Having to put their faith in one another while still having doubts about their relationship, Sam and Jake are charged with finding the great Evil One – did I mention that no one has ever seen this being?? He hides in plain sight and manipulates the guardians and everyone around him until he traps Sam with the golden dragon with healing fires, Drasine, in the “in between” place.

Nothing is as it seems, and some are not who they say … everyone has a secret agenda, but it is up to Sam, Jake, Charlie and Uncle Biggie to discover who to trust! Together they must expose the great Evil One and defeat him.

I have to say, this is one amazing book and series! There is immediate action and the listener is thrust smack dab into the middle of the mystery with the first few words. The author, Geoffrey Saign is wonderful and skilled at captivating his audience. His plot twists are epic leaving the listener stunned at times. This is a series that anyone could love – it has mystery, death matches, dragons, danger, surprise, adventure and above all else it has valued messages about friends, trust, love, and truth. There are a lot of characters and moving parts in this book but Saign does a beautiful job in keeping everything and everyone clear.

Lauren Holladay, the narrator, performs the book making each being come to life with the passion and energy she brings. It is obvious she has purposely selected the right voice for each character helping them to stand out, she moves the story along appropriately and captivates each listener with her smooth voice. Saign gives us an amazing story but Holladay gives it life through her talent and skill.

I highly recommend this book and series to anyone who enjoys mystery, animals, and adventure! This is one of those rare finds that the listener will find it difficult to shut off until the end. I cannot wait for the next one!

There were no issues with the production or quality of this audiobook. It was done precisely and clearly.

Audiobook was provided for review by the author/narrator/publisher.
Please find this complete review and many others at my review blog.
[If this review helped, please press YES. Thanks!]

I'm a fan of fantasy books, and usually use my credits on the names I am familiar with but the summary of the book and the audio sample hooked me, so I started on the journey with Sam and Jake with book 1 in this series and have been really surprised at how good the story and narration is,

From the beginning in book 1 (Whipeye), through book 2 (Gorgon) and now, book 3, which is my favorite, I find myself listening every chance I get, especially after work and instead of watching TV, I got hooked on the series.

The author has such created such interesting personalities with the animals in Kiraku as well as the humans in our world.
In book 1, two ordinary teenagers find themselves in an alternative world, full of beauty, sweet air and healing water. The kids run for their lives in book one, but they are helped out by friends who give them recourses that help give them power to fight the forces of evil. By the time you get to Drasine, Sam and Jake are no longer scared teenagers. They are ready for whatever comes their way, and they fight the good fight. Not like superheroes, but more like warriors. I was pleasantly surprised at how good this series is, especially this 3rd book, Drasine, It deserves 5 stars.