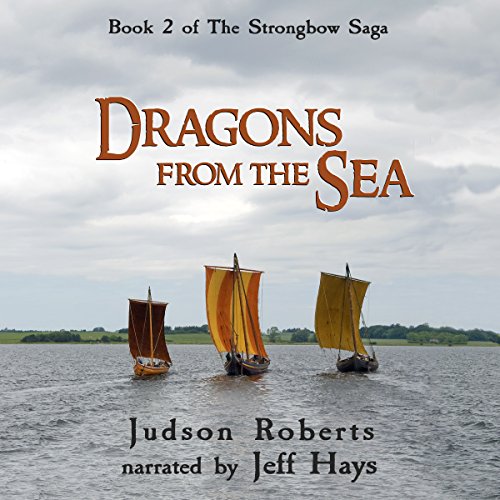 Dragons from the Sea

Dragons from the Sea

In Dragons from the Sea, Book Two of the Strongbow Saga, Halfdan Hroriksson has escaped - for now - the enemies who murdered his brother and seek to kill him, too. Determined to avenge his brother's death, Halfdan knows he must first gain experience as a warrior. He joins a Danish army gathering for an invasion of Western Frankia, for among its fierce chieftains and seasoned warriors he may find the allies he needs. But first he must prove his own worth in battle, and more importantly, he must survive, for he will face dangers not only from the Frankish enemy, but also from hidden foes within the ranks of the Danes.

It is often the case in a series of books that the books in the middle can't stand on their own - they feel like a bridge. That is the case with Dragons From The Sea. The character of Halfdan doesn't undergo any major further development. However, such is the case with periods in life, too. However, his story does continue to unfold and does so in a way that keeps the reader/listener engaged. I look forward to continuing along Halfdan's journey in the next two novels in this series.

Narrator Jeff Hays is consistent in his delivery, keep the the flow of the story steady. I appreciate the manner in which he gives voice to Halfdan as Halfdan tells us his story - as though Halfdan was telling his story to an intimate group. The narration is a good fit for the novel. Some female voices could be better, but they don't distract or detract from the work.

What would have made Dragons from the Sea better?

For starters, if you are telling a story about a people who prize fearless acts of bravery, maybe, just maybe, you shouldn't have someone narrate the story who sounds like a wimpy accountant.

That, and there is the painful story. Sure, the premise of the story is ok, A Viking thrall goes raiding to seek fame an fortune. But the author messes this simple concept up by forgetting that his protagonist is a 9th century (ish) young man, and not a 21st century liberal. The internal conflicts the character has are nothing short of silly and completely out of place in the epoch and culture.

Bottom line is, I really tried to like the series becuase I like this period in history. But skip this series, and try Cornwell's Saxon Chronicles, or the Raven Saga. Thoses are well researched and authentic.

Roberts writes with all the accuracy of a guy who watched a History Channel show on vikings and then decided to write a novel.

He sounds like a wimpy accountant, not a warrior

Cringeworthy is all I can say about this.

Another cliff-hanger ending, but this second book in the saga is just as good as the first. I'm listening to the newly produced audiobook versions, and I wish I didn't have to wait for the next book! I want to listen to them all in one go.

These books feel very well-researched, with immersive details about viking life and the 'Land of the Franks.' The characters, the adventure, and the story makes history come alive. Love it!

it was a good story and had some similarities to other novels on the subject.

I just purchased road to vengeance I love this series I am a huge fan of historical war fiction from ancient Roman - 1430 Britain and I have been so lucky to find this series when I thought I had tapped out the book series available. I want Harold's death to be a avenged and I love seeing what the alien world around him is forging Halfdan into. Judson Roberts is a master storycrafter weaving historical people & events into a fantastic journey that takes your breath away

Much better than the first

Still has some useless sound effects, but a lot fewer than book 1. The overall story and telling of the story have gotten a lot better than the first book as well.

I am also invested in seeing how it turns out now, so that says something about the books.

Couldn't stop listening. I am a fan of Conn, bernard, and many others. judson is right up there.

Not great but it hold your attention

What made the experience of listening to Dragons from the Sea the most enjoyable?

The author does a good job of getting us into the head of the main character. Other characters are more skeleton but they Ft. The storyline develops well and takes some interesting turns and twists.

I enjoyed it enough to buy and read the entire series.

I endured the second book to my surprise. I could enjoy a better plot, and character build up. I will go on to book three to see if the plot gets better.