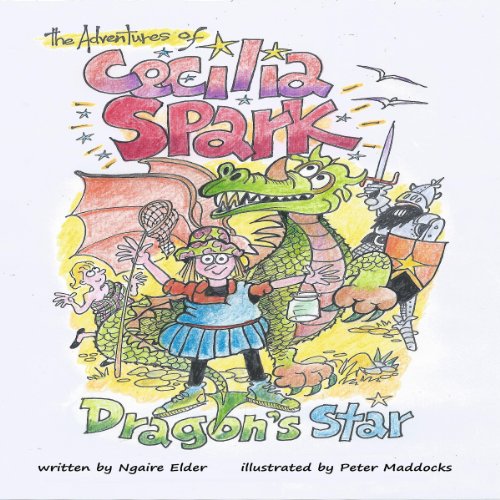 “The creature had been disturbed. Swishing its tail, it sailed effortlessly towards the noise source. It could clearly see something at the edge of the water... The giant water creature was getting closer and closer to its substantial meal. With one final flick of its powerful tail, it would be over.”

Cecilia Spark is in a race against time. Her challenge is to save the last Millennium Dragon, captured by a hideous knight of darkness, and reunite him with the star that gives him his power. With Orson, Ractus and Pacha by her side, Cecilia must rescue Fuego and save the Land of Dragons from an endless, desperate gloom. Harassed by crooked imps, captured in the lair of a giant spider, lost in the darkest of dungeons and threatened by a hidden river monster, will Cecilia and her brave friends succeed in their quest?

I highly recommend these books to all

Would you listen to Dragon's Star again? Why?

Cecilia's adventures really touch me. They are interesting, fun, and explorative. Such amazing fantasies in these well-written books. I love how they take you to another place. A mysterious storyline that allows its readers to explore the unknown and have an amazing time doing it. There is an old fashion feel to these stories that I adore. They are everything wholesome and pure. Dragon's Star is a fascinating and clever journey about concurring fears, friendship, loyalty and perseverance. This magical tale is filled with so many positive affirmations and at the same time has a cool vibe with a strong girl leading the way!

What does Hana Khalique bring to the story that you wouldn’t experience if you just read the book?

She adds a lot of charm to the adorable story. Brings the great tale to life.

This book made me smile all the way through. Darling.

I love all of Ngaire Elders books. She has a great grasp as to what children enjoy. Wildly talented@

If you could sum up Dragon's Star in three words, what would they be?

The intricate details that ties this book together.

What does Hana Khalique bring to the story that you wouldn’t experience if you just read the book?

She did a good job.