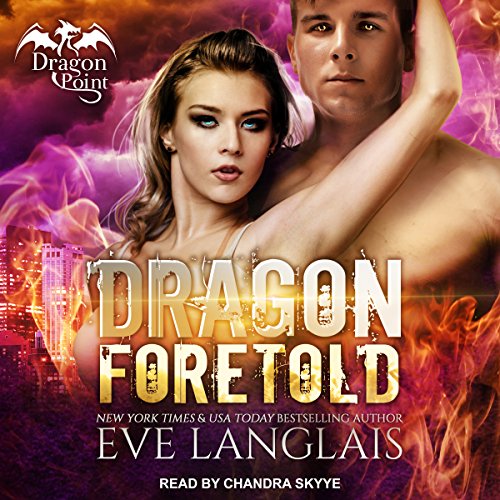 Many years ago, Sue-Ellen fell in love with the golden-haired boy held prisoner by her uncle. She did everything she could to keep him safe, even forsaking her family.

But would Samael do the same? When he finally escapes his prison life, she thinks they'll finally have their happily-ever-after.

A mating between them has been forbidden because she is a mere shifter, while he is the gold dragon the world has been waiting for. The one foretold.

What the world doesn't know is that Samael plans to conquer humanity - unless someone stops him, and she might have just found the only weapon that can.

What listeners say about Dragon Foretold

Sue Ellen finally gets a story of her own. Brandon and Wes tried protecting her from the uncle but her fate was sealed. Now she must choose between escape or love and deal with her choices.

Upstart Golden Dragon Samael is so arrogant he assumes he can order Sue-Ellen around without impunity. When she again refuses to mate with him, he throws her into an inescapable pit. She lands on a huge Dragon who just happens to be the boy she befriended and tried to keep safe. Remael, as it turns out, gave up everything just to keep her safe. He was thrown into the pit by Samael so Samael could have a clear path to Sue-Ellen. After both come away from the pit they face many challenges to be together. Liked this one very much. Can't wait for the next book.

this was good book

I love narrator and stroyline strong and powerful and lovely with the characters I love book.

I Love this series and feeling a bit bummed that I will have to wait for the next one. I highly recommend starting with the first book of this series. You will Not be disappointed. Enjoy!!