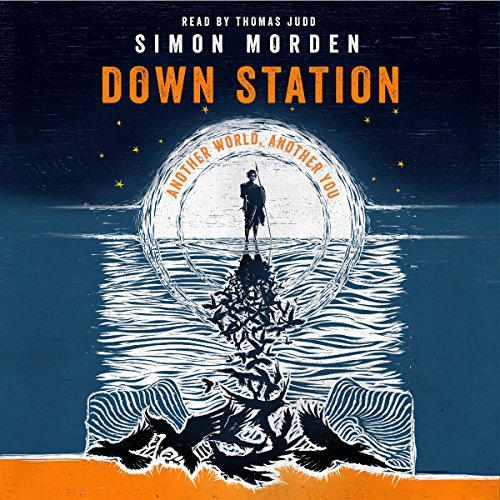 By: Simon Morden
Narrated by: Thomas Judd
Try for £0.00

A small group of commuters and tube workers witness a fiery apocalypse overtaking London. They make their escape through a service tunnel. Reaching a door, they step through...and find themselves on a wild shore backed by cliffs and rolling grassland. The way back is blocked.

Making their way inland, they meet a man dressed in a wolf's cloak and with wolves by his side. He speaks English and has heard of a place called London - other people have arrived here down the ages, all escaping from a London that is burning. None of them has returned. Except one - who travels between the two worlds at will.

The group begin a quest to find this one survivor - the one who holds the key to their return and to the safety of London. And as they travel this world, meeting mythical and legendary creatures, split between north and south by a mighty river and bordered by The White City and The Crystal Palace, they realise they are in a world defined by all the Londons there have ever been.

Reminiscent of Michael Moorcock and Julian May, this is a grand and sweeping science fantasy built on the ideas, the legends, the memories of every London there has ever been.

What listeners say about Down Station

Not yet a man Dalip becomes one by learning to stab a pig in the arse. London bad girl, Mary, discovers her super powers and dissavows drugs, car jacking and street brawling. Stainslav, Serbian war criminal, teaches kids how to stab pigs in the arse and then darth vader style succumbs to the dark side and tranforms into a sith jelly monster. Kids try to stab him to death, possibly in the arse. Apparently that doesn't work. One interesting character "the steward" gets no lines, his magic cane is not magic, and is murdered off stage just in case we wondered what happened to him. And more unto the setup for the sequel. Meh!

Glad when it ended!

I really struggled to get to the end of this book and had I not paid for it, I would have stopped listening after an hour-or-so.

The plot was loose and uninspiring and the characters were a strange mix that I just couldn’t connect with at all.

I couldn’t understand the purpose of profanities that accompanied most of what Mary had to say. You could strip them all out and you wouldn’t be any the worse for it. It’s not that I mind swearing as such, so long as it is there to convey something.

The narrator in the main was OK-ish, although Stanislav (sp?) and Mary’s characters really grated after a short period.

To my reckoning, this is one to miss.

Fantastic story, fantastic narrator and I really enjoyed listening to it. Can't wait for the next one.

interesting story, can't wait for the next book!
the way that the characters grew was new and unexpected!

Pleasing escapism in both senses of the word, nicely written, and well narrated. Look forward to the sequel.

I liked the characters, the writing was excellent, the narrator was outstanding. The only flaw for me was the introduction of `magic` powers which I personally find to spoil the action. I dislike quick fixes. But lovers of such things will love this book.

Enthralling story , can't wait for the next in series

The storyline had plenty of twists and turns, keeping you guessing as it moved at a pace. The only disappointment for me was that only half the characters were fleshed out while the other half just played peripheral roles, perhaps the next book will introduce them more.
I enjoyed the performance which was well read and the characters articulated with clarity.
I will certainly be continuing to read this series and I don't think anyone who does will be disappointed

uneven but has some interesting ideas

while an interesting story/concept the execution was muddled and lacked a strong narrative flow. will check out the rest of the books for the story and hope the characters and flow improve

Should have mentioned it was onlyPart 1!

If I had known that this was not a complete story! The narration stops in the middle of the adventure.

This title is certainly not categorised under YA (young adult) Fiction, but it should be.
After a promising start, I slowly started to wonder whether I had accidentally purchased a YA title. Its derivative pastiche, unsophisticated, somewhat fatuous style led me to conclude it was. But no it's supposedly aimed at a grown-up reader.
Put simply, its' underlying premise is part Neil Gaiman's Neverwhere, part Hunger Games, with a sprinkling of Margaret Atwood wannabe over the whole post-apocalyptic melange. Discerning readers of SF will get very impatient with the immaturity of this writer I think.
Not even Judd's wonderfully humanising narration can salvage this one.