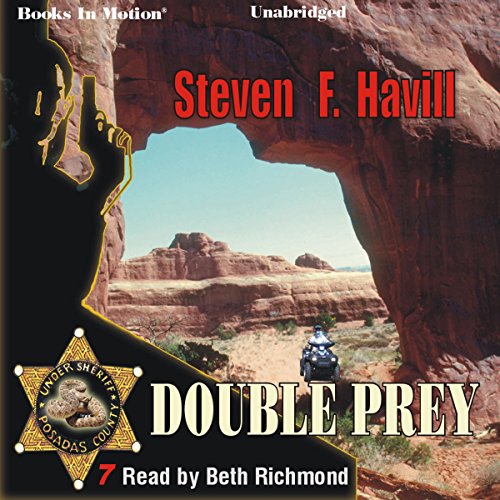 A rattlesnake fang pegged in a teenager's eye is just the beginning of a spring day for Posadas Undersheriff Estelle Guzman. The injured lad's older brother goes missing, and is found dead in an arroyo, apparently killed by his cartwheeling ATV. But most puzzling is what the dead boy found moments before he was killed... an astonishing discovery that takes deputies back to a five year-old killing. Estelle and the now retired Bill Gastner find themselves looking for a murderer altogether too close to home.

What listeners say about Double Prey

The book is set in the southwest. The protagonist is bilingual. The narrator cannot pronounce simple spanish words. This one is headed back . . .

Great story--narrator not so much

I really like the Gastner/Posadas mysteries by Steven F. Havill. The earlier audio books narrated by Rusty Nelson are great. The narrator spoiled this one for me--too sing-song, and Gastner's voice sounds like a quavery old lady. The book is great, but I had to stop listening and get the book in print form to finish. I know this narrator has read several of the earlier books, and I can't put a finger on what annoyed me so much this time. Too bad; good story.

Havill does it again!

What did you love best about Double Prey?

This holds you interest right to the end.

She is able to make each person sound different.

I did find chuckles all thru out.