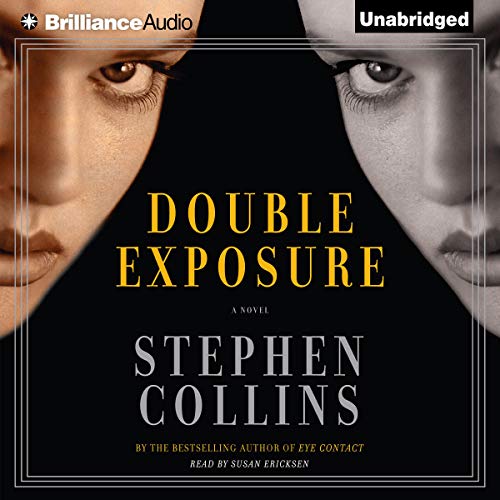 By: Stephen Collins
Narrated by: Susan Ericksen
Try for £0.00

In Double Exposure, Stephen Collins plunges listeners into a world he knows intimately: broadcast television. We meet top TV critic Joe McBride, who's doing fine professionally, but whose private life is a mess, what with a five-year-old daughter, an angry ex-wife, and a very-soon-to-be-ex-fiancée, not to mention a come-hither co-anchor and a beautiful brand-new neighbor who's alluring, available...and much, much, more than meets the eye.

Savvy, sexy, and edge-of-the-seat suspenseful, Double Exposure is the kind of thriller only an industry insider could create, a star turn from a man who knows that when people talk about a role to kill for, sometimes they mean exactly that.

"It's a 'can't-turn-it-off' reading by Susan Ericksen, who provides subtle vocal changes for crucial characterizations, especially throughout the potentially confusing conversations between the adult females of the story. This is a savvy and sexy reading!" (AudioFile)
©2008 Stephen Collins (P)2008 Brilliance Audio
Suspense
Show More Show Less

What listeners say about Double Exposure

A female version of Jekyl and Hyde, but not a good one. Purchased 6 years ago, I still remember the dissapointment.

Eroticism and a plot!

I enjoyed listening to this book as I usually do when Susan Erickson is narrating. It's an interesting portrait of the lengths to which a revengeful (very creative!) mind might go. It certainly raises questions about the power wielded by TV critics (or any media critic, for that matter) as well as the naivety, foolhardiness and self involvement of a sexually aroused male ego. I've given it fewer stars because there was something slightly disjointed about it - a kind of cynicism that I don't personally enjoy --> horrifically manipulative female vs self-absorbed, led-by-the-penis male. When I think about it, nearly every character in the book is portrayed unsympathetically. Perhaps that's why I didn't like it. Others with less need for warm-n-fuzzies might rate it higher : )