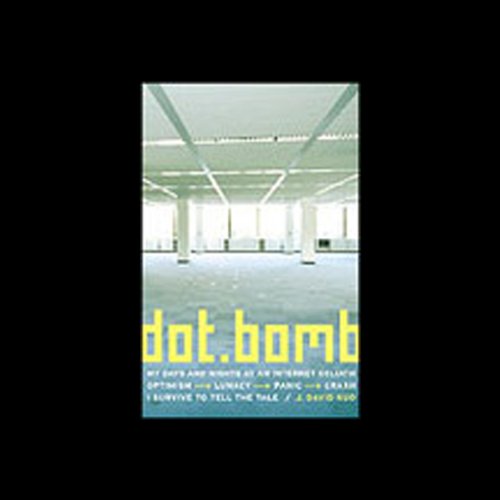 In 1999, at the pinnacle of dot.com fever, David Kuo was invited to walk through the magic portal. It was a huge Internet start-up called Value America, and in his new job as communications SVP, Kuo would spread their gospel: a new kind of retailing, linking customers directly to distributors or other middlemen. Ahead for Kuo lay the chance to be part of a new business paradigm. Not to mention the riches when his stock options bore fruit.

Dot.Bomb is the amazing story of the Internet gold rush as it could only be told by an insider. David Kuo saw it all: the sky's-the-limit optimism, the hundreds of millions of dollars spent in a giddy grab for eyeballs and market share, the investors slavering to be on the inside, the belief that there really were new rules. He also saw what happened when gravity reasserted itself, Wall Street demanded results, and flaws and failures that had been glossed over suddenly loomed huge. In the blink of an eye, Value America crashed back to earth, filed for bankruptcy, and was gone.

David Kuo's account of his days and nights at Value America captures with the intensity of a great novel the people who made this such a powerful experience with their incredibly hard work, their genuine belief, and their humor. Just as vividly it portrays their unbridled greed, wretched excesses, ego-driven blunders, and unmitigated power grabbing.

"This is a great story of behind-the-scenes action in the Internet gold rush." ( AudioFile)

What listeners say about Dot.Bomb

A look at Net Mania at its worst

As a former long-time resident of Charlottesville, I'm all too familiar with the rise & fall of the area's only billion+ $ net venture. So it was very interesting to get an insider's look at Value America through David Kuo's eyes.

First and foremost, this is a case study of a fast-moving dot.com with a "flexible" business plan. Value America was heralded for its inventory-less business plan, but eventually the major flaws in the model were revealed, especially on the B2C side. This book provides mostly cautionary tales. It describes the infighting and power struggles among the executives. It details the inability of the CEO to rein in the founder Craig Winn, the "visionary" promise-now/deliver-later salesman. And it touches on the operational failures that led to thousands of delayed orders and a general technology break down. Because Kuo was in PR and bus dev, we don't get an in-depth look at the information technology infrastructure, supposedly the crown-jewel of this company's assets. Instead we see the excessive and sometimes irresponsible deal-making that occured with little executive knowledge of the technological requirements.

It is an entertaining book that depicts how a company can blow through hundreds of millions of dollars that result in little salvageable value. Like the "startup.com" movie, dot.bomb also shows the emotional fallout at the executive level.

I read this book years ago and loved it as a time capsule of the dot.com era - but unfortunately this isn't the full story, it's an abridged version of the book that leaves out countless details that made the story so absurd. Hopefully this will get a full and proper unabridged version one day.

With that said this abridged version is still pretty good and gives you a general overview and some detail here and there. It does seem to skip around a lot but you get all the basics. As a fairly quick read this is enjoyable.

The reader is the author and he does a professional job.