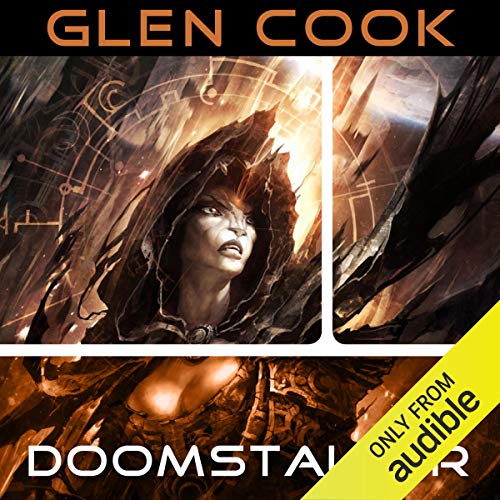 The world grows colder with each passing year, the longer winters and ever-deepening snows awaking ancient fears within the Dengan Packstead, fears of invasion by armed and desperate nomads, attack by the witchlike and mysterious Silth, able to kill with their minds alone, and of the Grauken, that desperate time when intellect gives way to buried cannibalistic instinct, when meth feeds upon meth.

For Marika, a young pup of the Packstead, loyal to pack and family, times are dark indeed, for against these foes, the Packstead cannot prevail. But awakening within Marika is a power unmatched in all the world, a legendary power that may not just save her world, but allow her to grasp the stars themselves.

From Glen Cook, author of the Black Company and Dread Empire novels. The first audiobook in the Darkwar series.

Be ready for an adventure

What did you love best about Doomstalker?

development of characters, descriptive inner dialog and of course the action

What was one of the most memorable moments of Doomstalker?

How she learned and used her talents.

Loved her steady voice, enunciation and various voices for the different characters.

No - Just a great read

Glen Cook is a very favorite author. I have read and reread many of his books many many times. I think this is my second time thru this series as I read it about 30 years ago and really liked it then. Black Company is my favorite series. Have fun and enjoy either series, I love his writing style and think that you will too.

What made the experience of listening to Doomstalker the most enjoyable?

It is one of my favorites.

Which character – as performed by Eva Kaminsky – was your favorite?

All of them. She really did a great job managing the pace of the events.

Over twenty-five years ago a friend introduced me to Cook's writings with this series. I have never been disappointed in any of his novels since. This was one of the first series i got as soon as I got a kindle. Now, I am overjoyed to have the audiobook as well.

I love this series and recommend it to anyone who is looking for another world to visit and explore.