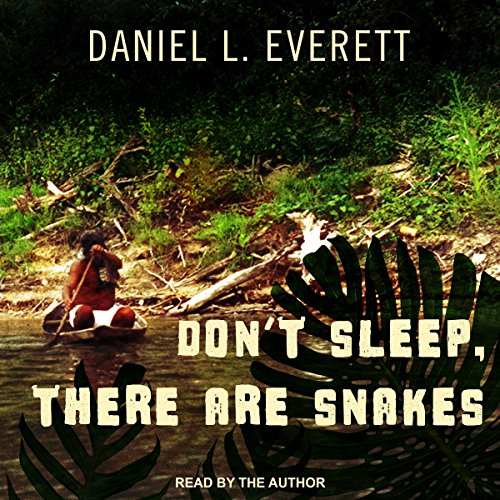 Don't Sleep, There Are Snakes

By: Daniel L. Everett
Narrated by: Daniel Everett
Try for £0.00

Daniel Everett, then a Christian missionary, arrived among the Pirahã in 1977 - with his wife and three young children - intending to convert them. What he found was a language that defies all existing linguistic theories and reflects a way of life that evades contemporary understanding. The Pirahã have no counting system and no fixed terms for color. They have no concept of war or of personal property. They live entirely in the present. Everett became obsessed with their language and its cultural and linguistic implications, and with the remarkable contentment with which they live - so much so that he eventually lost his faith in the God he'd hoped to introduce to them. Over three decades, Everett spent a total of seven years among the Pirahã, and his account of this lasting sojourn is an engrossing exploration of language that questions modern linguistic theory. It is also an anthropological investigation, an adventure story, and a riveting memoir of a life profoundly affected by exposure to a different culture. Written with extraordinary acuity, sensitivity, and openness, it is fascinating from first to last, rich with unparalleled insight into the nature of language, thought, and life itself.

"Rich account of fieldwork among a tribe of hunter-gatherers in Brazil.... Everett's experiences and findings fairly explode from these pages and will reverberate in the minds of readers." ( Kirkus)

What listeners say about Don't Sleep, There Are Snakes

This story is something which should be taught in schools today. From the intense accounts of daily pira ha life, to the technical linguistics of the language.

If you want to learn about what it truly means to be happy in life, then this is the book for you.

This book has changed my perspective on people, society and culture. The people referred to here have challenged my own perspectives and blessed me

A linguistic journey into the nature of existence

A journey into the heart of being through the study of linguistics. At times I found the passages using the native language a bit dry and repetitive. It was definitely worth sticking with it, however, as the lessons about the relationship between language, culture and finding happiness and meaning in life were enlightening.

No specific story line never got into it. A bitty journal that didn't catch my attention

Read by Daniel Everett himself you really get to appreciate the use of pitch, tones, rhythm, and other nuances in the Pirahã's unique language. You also can hear his feelings as he reads particularly emotional parts. Touching and surprisingly funny this is an amazing work.

This is a fascinating book about amazing experience. I loved the information conveyed. But the author self-narrated and it is clearly not his strong suit. Many listeners may find the pauses and mumbled last sentences distracting. But it is worth it to hear the story

A Story Told by the Man Himself

Dan is the only one who could tell this story. What a thought provoking and powerful tale. He takes you into the universe of a culture that does not carry anything with them from the past besides instincts. Essentially the Piraha tribe in the Rain Forest of Brazil are an ancient, unchanged people, with an extremely unique language, and many lessons to teach us. Daniel Everett dedicated over 30 years of his life to learning them, and teaching us.

I give most of the books I listen too five stars because they are good books. I would like to give this book at least six since it is exceptionally insightful. This book contains a stories about life in the Amazon, Everett and his family adjusting to living in a village and the dangers everyone in that location encounters. Mostly this is a book introducing the reader to a new language and culture. Everett's main proposed theory of language is that to fully understand a language you have understand the cultural context it came from. As a result we are shown a culture radically different from ours. Attached to this is a distinct way to think, different from the way westerners are used to thinking. Everything about this book was profound. Certainly worth the read.

Daniel Everett is an extraordiary man with a extraordinary tale. Meet the Pirahã indians with a cuture so different from anything you ever imagined and a language that has leading linguistic scholars totally baffeled. It's intriguing, funny, exciting and humbling to listen to. Perfect as an audiobook (due to the central role of the Pinahã language... you get to hear it spoken) read by Daniel Everett.

This book was fantastic. I like the way it was written starting from its style of organization, to its engaging plot, to its main argument against the Chomkian point of view. I believe that the writer has put great evidence to support his theory stating that language is not innate but rather a cultural tool created by humans.

While the story was mildly interesting, it was sad to see this man go from Christian to atheist when he became blinded by culture who refused to see Christ inwork around them

Inestimable value from an under-appreciated culture

This book might be the one I’d recommend above any other when it comes to sharing perspectives that challenge the assumption that the Western way of living is best.
It is fascinating to hear about a culture that evolved an inoculation against the problems of the rest of the world. In being arrogant and sure that their way of life is superior to all others, these people are protecting the treasure that is their simplistic and joyous way of living largely uninhibited and in the moment.

The narrator makes this book

It’s so cool to hear this language spoken and discussed by someone who actually speaks it. It makes the whole thing far more fascinating IMO.

Once started and past the foreword which seemed to focus too much on the language, I couldn't stop listening and was fascinated by it.