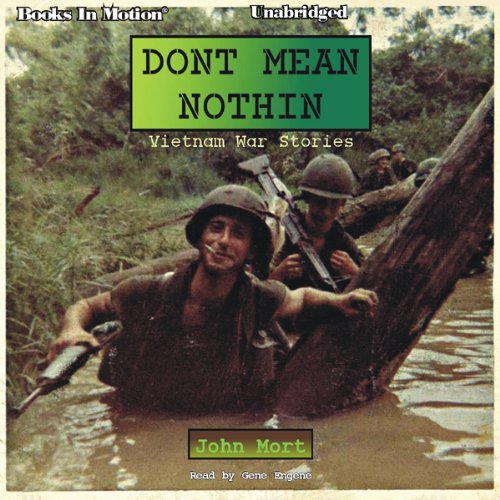 These 12 stories reflect the combat infantry experience of the Vietnam War--in the gritty “Tanks,” “Called of God,” and “Incubation Period.” There’s also the woman’s perspective of Arlene, a naive Red Cross volunteer or “Doughnut Dolly,” in “A Man’s World.” Mort captures veterans’ experiences in “Rest Stop,” a woeful, divorced man’s tale; “Hallelujah By and By,” a dark, almost supernatural story set in the Arkansas Ozarks; and “Behind Enemy Lines,” the story of a homeless, damaged man who at last finds his way home. All but two of these stories were previously published in such magazines as GQ and the Missouri Review, or in the collection, Tanks. Mort served with the First Cavalry in 1969 and 1970, near Tay Ninh, as an RTO.

To my ear, his accent does not lend its self to narrating, coupled with his inability to capture the listeners attention due to his mumbling drone.

10 minutes was all I could stand, then deleted it from my device.

Of all the books I have listened to or read about Viet Nam this was the worst one. This is comming from a Viet Nam Vet who served with the 5 th. Infantry Div, and the 101st Airborne Div. Recon Team LRRP.

I wouldn't waste my money.

This was NOT what I expected. The narrator sounds like a backwoods hick and doesn't do anything toward telling the stories with his, well, I would say "countryfied" accent but that would be an insult to the intelligence of those who live in the country. Some of the stories were completely pointless and hard to follow. I managed to struggle through it but wouldn't do it a second time. Invest your money in a better novel such as Matterhorn by Karl Marlantes.