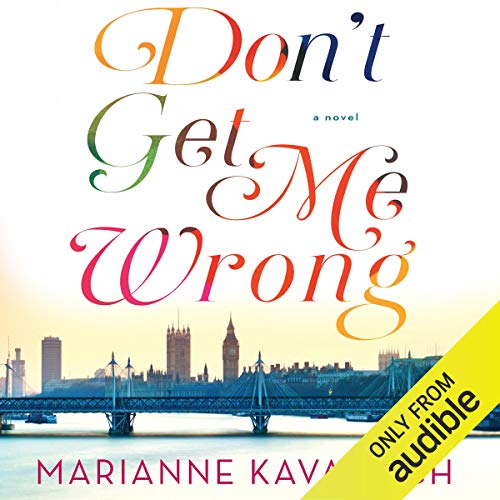 Don't Get Me Wrong

By: Marianne Kavanagh
Narrated by: Colleen Prendergast
Try for £0.00

For fans of Jojo Moyes, David Nicholls and Sophie Kinsella, here is a Pride and Prejudice for the modern era.

Londoners Kim and Harry can't see eye to eye...until the life of the person they both love most hangs in the balance.

Kim has never grasped what her free-spirited big sister, Eva, sees in a stuck-up banker like Harry and has spent her childhood trying to keep him out while Harry's favourite occupation is winding Kim up.

Both Harry and Kim are too trapped in their prejudices to care about what's really going on beneath the surface of each other's lives. They'll never understand each other - until the worst of all tragedy strikes.

Faced with the possibility of losing the person they both love most, long-buried secrets come to a head in ways that will change both Harry and Kim forever.

Marianne Kavanagh is a former deputy editor of Marie Claire and has contributed to a wide variety of newspapers, magazines, and websites, including the Telegraph, Daily Mail, Guardian, My Daily, Easy Living and Red.

Her debut novel, For Once in My Life, was published in 2014. She lives in London.

"Kavanagh’s novel is superior chick lit: beautifully written, enlivened by witty and wise observation." ( Sydney Morning Herald)
"[A] witty, summer-fresh debut." ( Independent)
"This book is fantastic. It’s hilarious, poignant and profound by turns; most of all, it’s unpretentious. Unlike so many novels it just wants to tell you a lovely story. It’s not about how clever the author is nor is it all style over substance. But precisely because of that it’s both clever and stylish anyway.... Adorable." ( Daily Mail)
"The charming and summery first novel from columnist Marianne Kavanagh. This human story of love’s near-misses centres around Tess and George, whose eventual (inevitable) meeting is cleverly delineated to call sentimental notions of soul mates into question." ( Vogue)

What listeners say about Don't Get Me Wrong

My goodness why did we have to go through all that just to get to the less the satisfying end. They just get together and that's it. Reminds me of the Gone Girl disappointment and feeling used and cheeted out of a good satisfying end by the author.
What a waste of words and a good story. This book was hard to get into and understand, it took me about a month and the fact that I did not have anything else to listen to listen to it. The chapters are not clear therefore at times the story line changes as if it were just paragraph.

Bares no resemblance to Pride & Prejudice

I don't want to spoil it for you by going into detail, but the main character is aggravatingly stubborn and I can't believe anyone could have put up with her in real life. Oh and that mention of Pride and Prejudice in the description is completely misleading. This is about as romantic as reading the back of a cereal packet.

Don't get me wrong

It's been quite a while since I choose an audio book which I enjoyed. I enjoyed. Girl on a train. Me before you and the follow up. So I was really pleased that I enjoyed this story so much. I hope you do too

This is the first audio book I didn't enjoy, not enjoyable listen for me sorry

The most irritating characters

I didn't even finish this book as the characters were so irritating and I couldn't care less what happened to them!