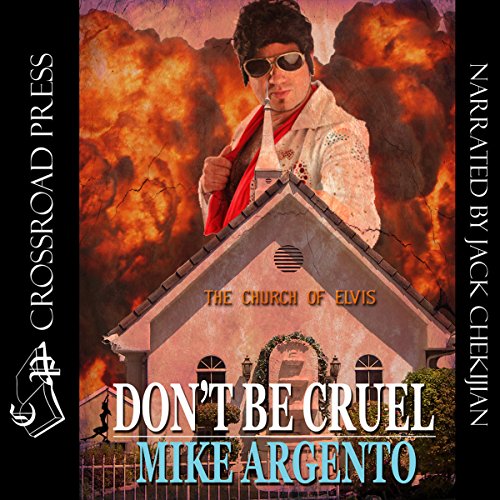 A law-student stripper, two inept hitmen, the First Church of Elvis, Scientist, and a small-time mobster's biggest scam... Things are about to get all shook up in this hilarious novel filled with explosions, attempted murder, intrigue, and a whole lot more.

"It's an understatement to say that Mike Argento is a funny writer. His wit unfolds across every character, scene ,and scenario of Don't Be Cruel. Virtually every page elicits grins and frequent gut-busting laughs. I'll never sit in a church pew again without looking at the altar and imagining the worship service at the First Church of Elvis, Scientist." (Mike Leonard, columnist, The Herald Times, Bloomington, Indiana)
"Bizarre, clever and full of pitch-black humor, Don't Be Cruel is one hell of a debut novel! Argento's voice, prose, and wit are sharp as razors." (Brian Keene, best-selling author of Ghoul and Darkness on the Edge of Town)
"In his first novel, the delightfully goofy Don't Be Cruel, Mike Argento proves once again he's a twisted bastard with a heart of gold. This crime caper novel is filled with classic Argento observations of true life absurdities that devoted readers of his columns (and there are more than a few of us) will immediately recognize and appreciate. He'll hate me for saying it, but his sentimental side is on fine display in Don't Be Cruel. As I have done countless times, I'm simultaneously shaking my head head wondering, ‘What the hell is wrong with that boy?' as I'm smiling and thinking, ‘Awwwwww.'" ( Lauri Lebo, author, The Devil in Dover: An Insider's Account of Darwin v Dogma in Small Town America)

What listeners say about Don't Be Cruel

Do not read this book while driving!

I think this guy writes for Mel Brooks. He's THAT funny! The plot is out there from the publisher's blurb, and I'm sure that I met the characters when working the Booking Room (including the excessive/constant use of the word f***). No spoilers to be found here (you wouldn't believe me anyway). Well, I guess that you should know that the "throne" that "the king" sits on is a Kohler. Can you just see a reader sitting in the subway or other crowded place laughing so hard every few minutes that eyes must be wiped? Trust me on this, you's have to be dead not to laugh your way through this one!
And talk about the audio performer, Jack C! Not only does he do voices suited to the characters (double meaning here), but so much of the narrative delivery is laid-back tongue-in-cheek. This is the perfect delivery to showcase the hilarity of the story.

I received this audio book as a gift in exchange for a honest and unbiased review. I really enjoyed this book. It has gangsters, murders, explosions, a strip joint and more. I would classify it as a suspense / action / thriller with a touch of humor. I loved the characters senses of humor in this book. Even bad guys can be funny. Absolutely loved the voices done by the narrator. I loved the voices used for grandma and Pappa. Kat is a coot! Even though this is a suspense / thriller, I found this book to be fun!

I liked this book. it strikes me as a book that would be real fun as a movie. if I had to wrap the whole book into one line it would be "if it can go wrong it does!" it is one mess up and oops after another! lots of great one liners that will get you to laugh out loud!
the narration was wonderful. how he comes up with a different voice for each character and manages to keep them all straight is beyond me!

didn't really like this book.There was just too much going on.There are gangsters,strippers,lawyers,murder,sex...you name it it's happening.I enjoyed Jack Chekijians narration,but even that couldn't save the book in my eyes.
This audiobook was provided to me at no cost for a fair and honest review