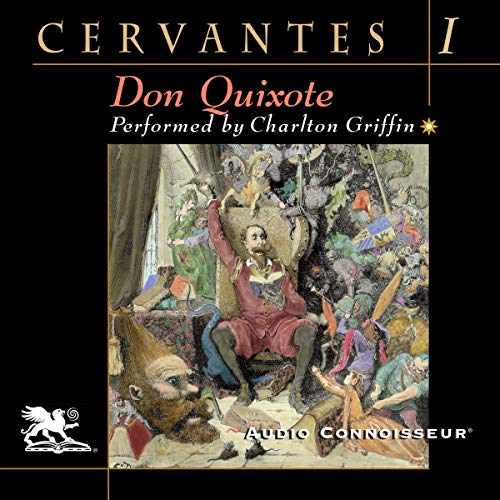 Don Quixote is widely considered to be the first modern novel. As a classic of Western literature, it is regarded by scholars worldwide to be one of the best works of fiction ever written and a magnificent product of the Spanish golden age of literature. And merely from a grammatical standpoint alone, Cervantes' influence on the Spanish language has been so great that his work is often called "la lengua de Cervantes".

Don Quixote was written in two separate volumes, of which this production is the first. It introduces the character of Don Quixote de la Mancha, a hero who carries his enthusiasm and self-deception to unintentional and comic ends. He is paired with a comic character of opposite qualities, Sancho Panza, a man of low self-esteem who is a compound of grossness and simplicity. On one level Don Quixote works as a satire on the romance of chivalry, which, though still popular in Cervantes' time, had become an object of ridicule among more demanding critics. The choice of a madman as hero serves a critical purpose, for it was the impression of ill-being or insanity, rather than a finding of dementia or psychosis in clinical terms, that defined the madman for Cervantes and his contemporaries. The novel allows the author to illuminate various aspects of human nature. Don Quixote is noble minded, an enthusiastic admirer of everything good and great. And yet, having all these fine qualities accidentally blended with a relative kind of madness, Don Quixote is loosed upon a "sane" world in which his worldview is benignly at variance with reality.

What listeners say about Don Quixote, Volume One

Wonderful Narration! A true joy to listen to.

Wonderful. Just fantastic. I love the narrator and the characters. I laughed out loud so much. The punch lines are so subtle and so smart. One of my all time favorites. The narrator is a perfect match. Consistent and the most talented character definition I've ever listened to.