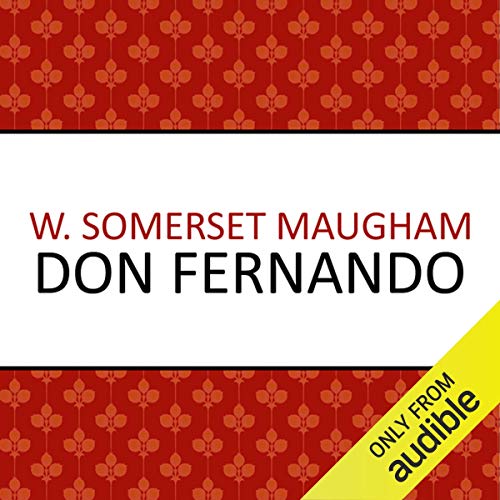 By: W. Somerset Maugham
Narrated by: Crispin Redman
Try for £0.00

Considered by Graham Greene to be Maugham's best work, Don Fernando is a paean to a golden age of enormous creative energy. It discusses the writings of St. Teresa and the paintings of El Greco, and comments with sagacity and wit on such illustrious figures as Cervantes, Velazquez, and the creator of Don Juan.

This vibrant assessment of a great people at their greatest hour is full of happy surprises, curious facts, and stimulating opinions that reflect Maugham's lifelong enchantment with the landscape and people of Spain.

"Maugham's best travel book” (Washington Post)
"He was a superb storyteller - one of the very best in our language - who wrote with a worldly, sardonic understanding of the human condition” (Daily Mail)

What listeners say about Don Fernando

Maugham exhibits a love of people and helps to immortalise characters that seem from another world. Well read and well worth a listen.

One of the best Maugham' work. The spirit of Spain in her golden age. Masterpiece and excellent narration! Thank you for great job!