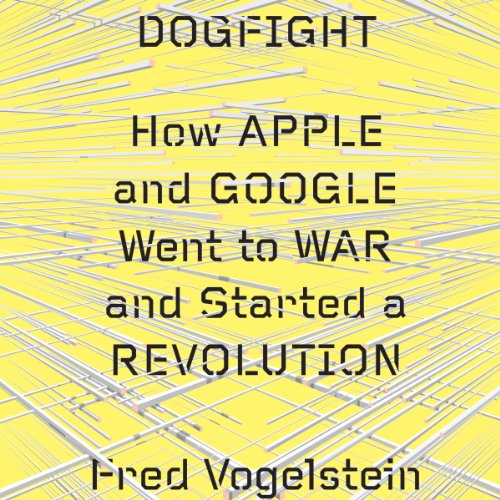 Behind the bitter rivalry between Apple and Google - and how it's reshaping the way we think about technology.

The rise of smartphones and tablets has altered the business of making computers. At the center of this change are Apple and Google, two companies whose philosophies, leaders, and commercial acumen have steamrolled the competition. In the age of Android and the iPad, these corporations are locked in a feud that will play out not just in the marketplace but in the courts and on screens around the world.

Fred Vogelstein has reported on this rivalry for more than a decade and has rare access to its major players. In Dogfight, he takes us into the offices and board rooms where company dogma translates into ruthless business; behind outsize personalities like Steve Jobs, Apple's now lionized CEO, and Eric Schmidt, Google's executive chairman; and inside the deals, lawsuits, and allegations that mold the way we communicate. Apple and Google are poaching each other's employees. They bid up the price of each other's acquisitions for spite, and they forge alliances with major players like Facebook and Microsoft in pursuit of market dominance.

Dogfight moves like a novel: Vivid nonfiction with never-before-heard details. This is more than a story about what devices will replace our phones and laptops. It's about who will control the content on those devices and where that content will come from - about the future of media in Silicon Valley, New York, and Hollywood.

What listeners say about Dogfight

Read by an android

This is a book about Android, and appears to be narrated by one. The book is interesting and gives some insight into the world of Apple and Google, but the narrator is very robotic.

As someone who's always been interested in following the tech industry, I didn't learn a huge amount from this book, but it was interesting to hear the stories around the iPhone and iPad launches, and how Google positions Android in the marketplace.

I've you're interested in that kind of thing, then it's worth listening to.

What other book might you compare Dogfight to, and why?

Jobs autobiography due to subject matter and inside the plex

The narrator drones on, puts little life into the story and sounds almost robotic. One of the worst performances i've heard

Good beginning but the last few chapters chicken out and follow the obvious conclusion using history as a guide after spending the first half telling us how the two companies changed history.

Interesting. Not outstanding. Last chapter a bit of a let-down and does hold well as of March 2015. In summation good but not revelatory.

Just as the previous reviewer said, J.P. Demont's voice is wooden and robotic - who chose him? Great story, but a VERY stiff performance. Choose Stephen Fry next time ;-)

Why Apple and Google Do What They Do

What about J. P. Demont’s performance did you like?

A good voice to listen to

It is a very long listen, not really suited to listening to in one session.

If you ever wondered why Apple and Google do certain things, this will help you understand as it gives huge insights into the behaviour of each company. I found it to be a really interesting experience. Recommend.

Great history of the war.

The discussion about the engineers during the iPhone introduction.

The narrator mispronounces a handful of words. One example is spelling about RIM instead of just saying 'RIM'.

Well the first half of the book is interesting

What disappointed you about Dogfight?

Dogfight is really all about Google and the author does a poor job of hiding his bias. Once he has covered Google completely reworking Android once the iPhone is released very little new information is presented.

What was most disappointing about Fred Vogelstein’s story?

It degenerated into an Apple-bashing book with very little new information about Google or Apple presented. Very little in-depth analysis of the interactions between Google and Apple. Doesn't provide any information that might put Google in a bad light.

Have you listened to any of J. P. Demont’s other performances before? How does this one compare?

The reader is very good with the exception of his constant mispronunciation of iOS.

If you could play editor, what scene or scenes would you have cut from Dogfight?

I wouldn't cut any scenes but would have sent the author back to do more research. Much of the second half of the book is just mentioning old news.

The story is very interesting, but the narrator says several tech terms and names wrong. Also the story has a heavy pro-Apple bias for sure

The book was full of interesting details, though the readers mispronunciation of some common technology names was a bit maddening.

Where does Dogfight rank among all the audiobooks you’ve listened to so far?

The story was great. The issue I had was that the narrator (or whomever was advising the narrator) had absolutely no tech background whatsoever.

It was a really good story

Did J. P. Demont do a good job differentiating all the characters? How?

No. J. P. Demont alone is the reason why the ratings for this book were not 5 stars across the board.

After listening to this book, it gives you a new found respect for Google & Apple.

Not going to lie it makes you want Pro Apple which I am but it also makes you want to support Google because this is so much bigger then who has the best phone.

I tip my hat to the author he did an excellent job and the reader was perfect for this book.

it is a must read

great book. loved it. very interesting. it gives one a glimpse on what's actually going on in the sphere of technology where big corporations play their big games affecting the world around us. it is magical.

Perhaps I'm not very objective myself, but I routinely use products from both companies, however, I felt the language used was extremely Pro-Google. Describing Google with terms like heroic and not addressing any of the privacy concerns people have with Google seemed a little one sided, but worst of all was the bias in the characterization of the CEOs and leaders of the two companies.

Larry Page was hailed as a visionary for his ability to lay out the future because he made one speech after not being seen for a year. The fact that no one really knows what power Eric Schmidt even had at Google as CEO was briefly addressed before describing his ability to relate data in glowing terms. And it is strictly implied that the motivation of Google is simply to "build a better tomorrow". At the same time Jobs, Forstall, and really much of Apple was described as despots and tyrants. Oddly, Jobs was denounced by the author as being in hysterics and making unreasonable demands of Google in the early Android days and then derided during the same time period as obviously too sick from his cancer to fight back like the old Steve Jobs would have. Then Cook was assailed for not being Steve Jobs.

Personally, I believe that both these companies are self serving. Neither one is out to be your friend. In fairness, the author states at the beginning that he will give his opinion on who he thinks use winning, however, I would have preferred this only at the end after all the material had been presented. In truth, it was clear who he thought was winning this fight half a chapter after making this comment n the introduction.

Despite this, it is full of good information, quotes, and helps clarify the timeline for one of the most innovative 5-6 year periods in the history of technology. Definitely still recommended for those that are interested in learning more about these companies during the early iPhone and Android eras

well worth reading but not likely to be a classic.

Dogfight is a good book and offers many insights and anecdotes about the smartphone-centered competition for platform control bn Apple and Google. unlikely to be a classic.

They should make all business school students read this. This is probably the most timely and relevant business story I've read as of early 2016.