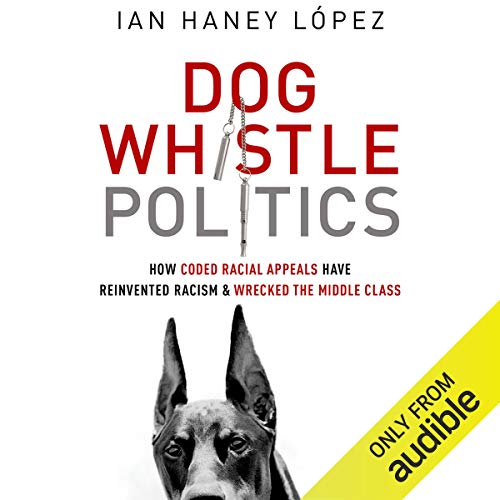 Campaigning for president in 1980, Ronald Reagan told stories of Cadillac-driving "welfare queens" and "strapping young bucks" buying T-bone steaks with food stamps. In trumpeting these tales of welfare run amok, Reagan never needed to mention race, because he was blowing a dog whistle: sending a message about racial minorities inaudible on one level, but clearly heard on another. In doing so, he tapped into a long political tradition that started with George Wallace and Richard Nixon, and is more relevant than ever in the age of the Tea Party and the first black president.

In Dog Whistle Politics, Ian Haney Lopez offers a sweeping account of how politicians and plutocrats deploy veiled racial appeals to persuade white voters to support policies that favor the extremely rich yet threaten their own interests. Dog-whistle appeals generate middle-class enthusiasm for political candidates who promise to crack down on crime, curb undocumented immigration, and protect the heartland against Islamic infiltration, but ultimately vote to slash taxes for the rich, give corporations regulatory control over industry and financial markets, and aggressively curtail social services. White voters, convinced by powerful interests that minorities are their true enemies, fail to see the connection between the political agendas they support and the surging wealth inequality that takes an increasing toll on their lives. The tactic continues at full force, with the Republican Party using racial provocations to drum up enthusiasm for weakening unions and public pensions, defunding public schools, and opposing health care reform.

Rejecting any simple story of malevolent and obvious racism, Haney Lopez links as never before the two central themes that dominate American politics today: the decline of the middle class and the Republican Party's increasing reliance on white voters. Dog Whistle Politics will generate a lively and much-needed debate about how racial politics has destabilized the American middle class - white and nonwhite members alike.

A great insight into modern campaigns and the ml decisive messages the perpetrate not just on race but social classes and fanciful biggie men.

Excellent! (+nothing wrong with the narrator)

Although the material in this edition is a bit dated by the summer of 2018, the arguments are compelling and the history of institutional racism is shocking. Also noteworthy is the narration. This is the best performance I've heard on Audible.

Would you try another book from Ian Haney López and/or Eric Yves Garcia?

Other listeners don't seem that bothered but, personally, this narrator makes me want to jump out a window. He has an affectation that reminds me of a sit com parody of a Shakespearean actor and a cheesy theatricality better suited to slumber party ghost stories. Every sentence is infused with over the top drama--a rising cadence dropping suddenly to a hushed finale. I half expected a piano to bang out "dum de de dum" at the end of each sentence. I've tried to come back to it a few times but I can't get past the narration. I will buy this book in print.

BRILLIANT. Painful, but the truth often is.

Great book on REAL American History. You may cry, but you NEED to read this.

A Most Important Read for Our Present Time

Keenly accurate and approachable description of the political landscape that has led not only to the current political chasm, but more importantly, to the deep racial divisions we see playing out in new (and old) and horrific ways throughout the U.S. However, López does not leave the reader in a state of despair, but rather, offers practical and tactical solutions for working our way toward a society that seeks the good of ALL.

Love that this book is fair...that is not to say it is balanced...it is decidedly left-leaning, as should any listener be (particularly on the issue of race) once listening to what Lopez has to say. However, it does not demonize (even kind words are said of George Wallace). It simply tells the story of how race became as it is in the American political landscape.

Straightforward, hard-hitting book that shines new light on uses of racism that have cost us--the middle class, the struggling working class, and the poor--enormously, to the benefit of both conservative and liberal politicians and the wealthy. Narrator's volume is a bit low.

This book offers a thoughtful, unabashed insight into contemporary racism: Its roots as well as its effects. The book is pregnant with connections to racism in the political sphere of the last 50 years. If you read The New Jim Crow, this book offers a parallel view, but from a much more political point of view. Highly recommended.

First, let me say that I will studiously avoid this narrator in the future. He speaks in a loud voice until the end of each sentence, at which time he drops to a whisper. This might be for some imaginary emotional effect, but in a noisy car that means you either turn the whole thing loud enough to hurt your ears or you miss the last third of each sentence.

I enjoyed the book in the sense that it gave a name to a phenomenon that I have long been watching: the politicians' habit of talking about race without ever directly using offensive language. The author developed the concept in great detail and helped point out racist talk that is not clearly open to criticism. You can see the defense against dog-whistle racism by looking at the critical reviews of this book.

I have to say I could not follow the author into the deeper reaches of his exposition. Jimmy Carter and Bill Clinton as racist presidents? I listened closely to the reasoning, but that part of the story does not ring true for me. If they used terms that kept the whole south from turning against them, maybe they share some blame. In their hearts, I do not think they are racists.

A thoughtful person, especially one who can open his mind to perhaps a bit of self-criticism, would benefit from these ideas even if not accepting the whole package. I believe the important arguments could have been delivered in a much shorter format, maybe an article or a radio interview rather than a book. However, the thinking behind it has a good deal of merit.

My recommendation is read it if you want to raise your awareness of subtle racism. Don't bother if you are unconcerned or unlikely to think through the new ideas. If you read it, you might prefer the written version instead of the maddening alternating volume in the narrated work.

Relevant today as when published

Professor Ian Haney Lopez's book is a must read to understand our racialized politics today.