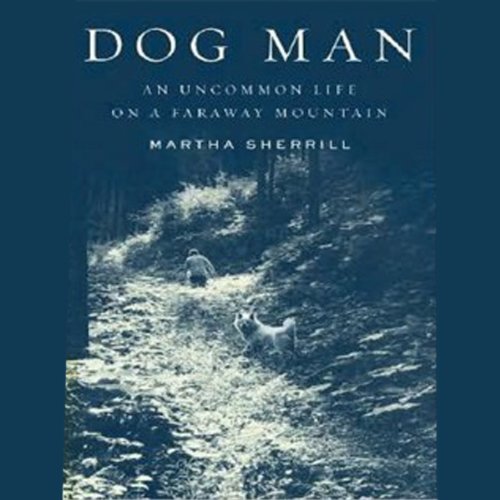 As Dog Man opens, Martha Sherrill brings us to a world that Americans know very little about---the snow country of Japan during World War II. In a mountain village, we meet Morie Sawataishi, a fierce individualist who has chosen to break the law by keeping an Akita dog hidden in a shed on his property.

During the war, the magnificent and intensely loyal Japanese hunting dogs are donated to help the war effort, eaten, or used to make fur vests for the military. By the time of the Japanese surrender in 1945, there are only sixteen Akitas left in the country. The survival of the breed becomes Morie's passion and life, almost a spiritual calling.

Their village is isolated, but interesting characters are always dropping by---dog buddies, in-laws from Tokyo, and a barefoot hunter who lives in the wild. Due in part to Morie's perseverance and passion, the Akita breed strengthens and becomes wildly popular, sometimes selling for millions of yen. Yet Morie won't sell his spectacular dogs. He only likes to give them away.

Morie and Kitako remain in the snow country today, living in the traditional Japanese cottage they designed together more than thirty years ago---with tatami mats, an overhanging roof, a deep bathtub, and no central heat. At ninety-four years old, Morie still raises and trains the Akita dogs that have come to symbolize his life.

In beautiful prose that is a joy to read, Sherrill opens up the world of the Dog Man and his wife, providing a profound look at what it is to be an individualist in a culture that reveres conformity---and what it means to liv...

"There's not a sentimental word in this book, but it will move you strongly." (Bill McKibben, author of The End of Nature)
"Morie Sawataishi has learned from his beloved Akitas to embrace the wild. Read this book and feel that power." (Neenah Ellis, author of If I Live to Be 100)

What listeners say about Dog Man

I love Akitas, and all dogs in general, so when I saw this, and being a devoted Dog owner(Akitas) I was curious to learn about the life in a country where ways are so different to most, this book explains the life of one man and his fight in the hard Times of war and how when others were killing dogs for money and survival, he saves and protects, and leads a life where owning a dog makes you rich in life but not rich in money, how he and his family go without, how hard Times within his family with the death of children pushes him and his family to the limits.

But this mostly tells the story of how the Japanese Akita was saved and how over the years how the akita was changed to what we all know and love now, this is a fantastic true story of a mans fight and a breeds survival.....

I recommend this 100% and this is a fantastic look in to a way of life and the look in the history of a fantastic breed.

Would appeal to dog owners of any breed and those that have a general history/dog/Japan interest.

I really enjoyed this book, and it kept me engrossed on a long journey. The detail and the writing were beautiful, and it envoked the Japanese landscape and history very effectively.
The reader was very clear and had a nice speaking voice. She spoke confidently and with a real sympathy for the subject. My only criticisms were that I found her pronounciation a little odd - I am used to the western pronounciation of Akita (a-KEE-ta) rather than the one used here (a-kee-TAH), but that was only a little distracting. My main disappointment was that there was not more about the dogs themselves. Although each chapter was named for a particular dog, there was very little about the breeding plans that led to each animal, and much more about the people and the politics of the time. For a dog enthusiast like me, wanting to learn more about the breed, it was frustrating not to be told more about the bloodlines and breeding methods of someone so involved in the redevelopment of the Japanese Akita.
All in all, a super book and highly recommended for both breed enthusiasts and people wanting to know more about Japanese society.