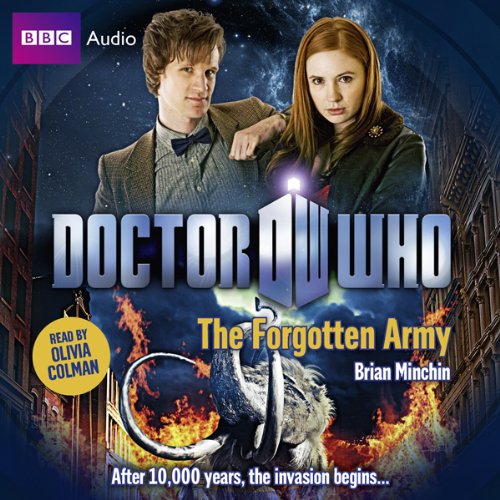 Doctor Who: The Forgotten Army

By: Brian Minchin
Narrated by: Olivia Colman
Try for £0.00

Let me tell you a story. Long ago, in the frozen Arctic wastes, an alien army landed. Only now, 10,000 years later, it isn't a story. And the army is ready to attack. New York is one of the greatest cities on 21st century Earth... But what's going on in the Museum? And is that really a Woolly Mammoth rampaging down Broadway?

An ordinary day becomes a time of terror, as the Doctor and Amy meet a new and deadly enemy. The vicious Army of the Vykoid are armed to the teeth and determined to enslave the human race, even though they're only seven centimetres high. With the Vykoid army swarming across Manhattan and sealing it from the world with a powerful alien force field, Amy has just 24 hours to find the Doctor and save the city. If she doesn't, the people of Manhattan will be taken to work in the doomed asteroid mines of the Vykoid home planet.

But as time starts to run out, who can she trust? And how far will she have to go to free New York from the Forgotten Army?

This is a thrilling, all new adventure featuring the Doctor and Amy, as played by Matt Smith and Karen Gillan in the spectacular hit series from BBC Television.

What listeners say about Doctor Who: The Forgotten Army

I love Doctor Who. The narrator was a excellent choice and it is a superb performance. All I can say brilliant