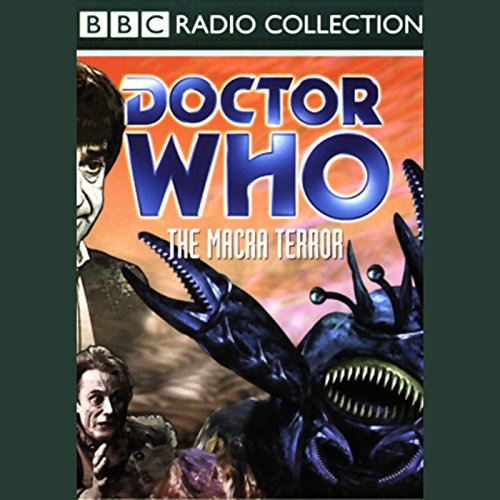 The Doctor, Polly, and Ben visit a human colony that appears to be one big holiday camp. They soon discover, though, that its inhabitants have been brainwashed by the Macra, giant crab-like creatures who have taken over the colony. The humans are being forced to mine a gas that is essential for the Macra to survive, but fatal to them.

It's a scary race to rescue them, with Ben getting taken in by the Macra for a time, but eventually the time travellers manage to restore the colony's freedom.

What listeners say about Doctor Who

A holiday camp of the future controlled by evil crab people. What more can you ask for? Patrick Troughton is at his lovable best and this is the only way to enjoy the Macra who would not return to the TV show again until 2007 - 30 years after their debut.

Heh, maybe I just like stories with giant crabs

I enjoyed this one quite a bit. The Doctor (along with Jamie, Ben, and Polly) come to a colony on an unnamed planet. It seems Utopian, with Refreshers and machines to tone your body and repair your clothes, until they get the gist that something is up. Not only do the guards seem particularly interested in the ramblings of a crazed prisoner, but certain strict rules are in place. And there is mention of pits and labor sites. The Doctor is quite active in this one (some of the earlier stories would have him as an almost passive observer, in my experience) and works harder than any of his companions to solve the issues. One does have to get used to the "linking narration" (at first, every little thing is described and by the end, several minutes will go by without a lot of clues) but once you do, it's not too hard to imagine the scenes and to enjoy the adventure. My favorite Second Doctor story to date (though, due to the BBC archive wipe, only about the third one I've seen).

Overall a decent story but the linking narration felt too sparse - often you would hear sound effects and be left wondering what was going on. Not sure why this one was different - hope future ones are not like that.