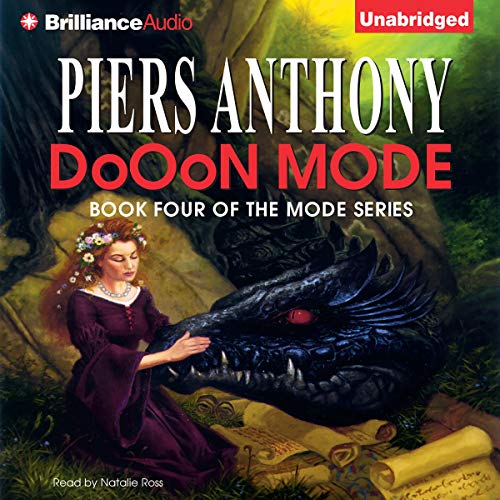 Beyond the world we know, there is a multiverse of Modes where many strange realities interlock in an infinitely intricate pattern, and a perverse and deranged Emperor plays a deadly multidimensional game with human pawns as his slaves.

Now, in DoOon Mode, Piers Anthony delivers the breathtaking climax to this awesome saga. Fearing the heroine Coleen's dawning power, the depraved Emperor Ddwng dispatches a terrible Mind Monster to assault her soul and bend her to his will. To protect herself, and those she loves, Coleen must journey back through many worlds to her own home on Earth, face her deepest and darkest fears, and draw the strength for a final confrontation to save the multiverse from tyranny and domination.

Imaginative with a serious lesson

A fitting ending to the mode series, DoOon Mode does take several disturbing situations from the previous books even further. If you do not like where the other books are going then this book is not for you. Although they switched narrators from the other three books in the series, Natalie Ross was so good it didn't take long to get used to the change.

I did not care for the reader accent & she spoke very quietly when speaking for males.

Would you try another book from Piers Anthony and/or Natalie Ross?

Piers is a very good writer,but that narrator is fingernails scratching a wall.

Would you be willing to try another one of Natalie Ross’s performances?

What character would you cut from DoOon Mode?

All the cat people. How many times can this subject be visited.

Save your time and cash.

im mad as hell they did not use Mark Winston as the Narrater.
thats like changeing actiors in the middle of a movie.
as for the story i like it fine.

In this book, I feel Piers Anthony has gone a bit too far in explicitly describing rape and oral sex scenes regarding children. It was pretty disgusting. I wish I could delete this book from my library. I have deleted it and the whole series from my computer.