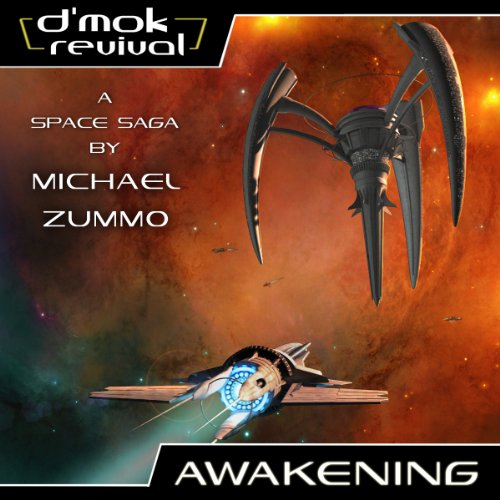 By: Michael Zummo
Narrated by: Kyle McCarley
Try for £0.00

Millennia ago, the warmongering Nukari eradicated the ancient, space-exploring D'mar. Not even the greatest of their warriors, D'mok, gifted with super-human abilities, could stop the total annihilation of his people.

Now, the fledgling human Coalition lies in the Nukari's sights. The first attack left a space station destroyed and one man, Rhysus Mencari, the sole survivor. But in that man awakened D'mok-like powers, sparking the revival of the only force that could oppose this powerful enemy.

Still distraught over the loss of his family, Mencari teams up with Osuto, the last known D'mar alive. Can Mencari overcome the shadow of his past in time to master his new found abilities, gather a new team of D'mok warriors, and hunt down the Nukari before the next onslaught?

This is the first book of The Invasion Trilogy, the beginning of the D'mok Revival series of novels by Michael Zummo.

No.
It felt more like a computer RPG, the a good book.
Every trip/mission led to a new companion or a clue. random crystals picked up turns out to be important later....

Could you see D'mok Revival: Awakening being made into a movie or a TV series? Who should the stars be?

It would be a good RPG.

the whole story read like a video game walk thru. disconnected pieces where powers, companions or artifacts where acquired.

If a Audiobook version of Nickelodeon ever existed this book would probably be available for consumption in said hypothesised media.