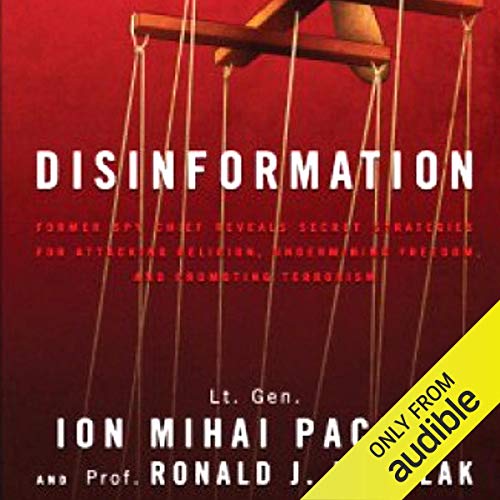 The highest-ranking Soviet bloc intelligence official ever to defect to the West, Lt. Gen. Ion Mihai Pacepa is at it again. A quarter century ago, in his international bestseller Red Horizons, Pacepa exposed the massive crimes and corruption of his former boss, Romanian President Nicolae Ceausescu, giving the dictator a nervous breakdown and inspiring him to send assassination squads to the U.S. to find his former spy chief and kill him. They failed. On Christmas Day 1989, Ceausescu was executed by his own people at the end of a trial whose accusations came almost word-for-word out of Red Horizons.

Today, still living undercover in the United States, the man credited by the CIA as the only person in the Western world who single-handedly demolished an entire enemy espionage service - the one he himself managed - takes aim at an even bigger target: the exotic, widely misunderstood but still astonishingly influential realm of the Russian-born "science" of disinformation. Indeed, within this audiobook, Pacepa, along with his co-author, historian and law professor Ronald Rychlak, expose some of the most consequential yet largely unknown disinformation campaigns of our lifetime.

What listeners say about Disinformation

not bad but expected more insight

i expected the author to focus more on actual topics and todays rampant neomarxism and progresivism in the west and how the kgb managed inplement those ideologies so successful in the US and Europe - something like Yuri Bezmonov exposed in the 80ties. instead the author focuses more on rehabilitating pope Pius and also the Kennedy assissination, which are not bad topics per se, but I just expected more info on the deception tactics of kgb and the impact it has until now. Also he despises his former boss Ceauvescu and the communist regime but kind of worked for him more than 20years. he mentioned also his dad also wanted always to go to the US but somehow his son managed to get so high up in the ranks in a communistic regime- no normal person could have such a career if his parents werent involved politically and good communist. So I am taking this book with a grain of salt, the performance of the reader however was very good and I enjoyed listening.

I found the author's account very interesting and engaging. I don't think the basic premise of disinformation is unfamiliar to most with an interest in politics or history but the review of Soviet involvement and development was intriguing.

I feel that the author has overreached somewhat in his application of the disinformation analysis to the recent US elections. The analysis presented leaves many unanswered questions such as what the Republican campaign was doing and Mitt Romney himself is only spoken about in glowing terms. It was distasteful to compare Obama to Ceausescu which he states he doesn't want to but then goes on at length. No individual in politics is likely to be above reproach but this seemed a bridge too far. The author also cited facts about the US debt for which the blame is laid at Obama's door. This is just plain lazy and some might say a form of disinformation as it used the kernel of truth and viewed it through a partisan lens.

All this being said I did enjoy the book overall.

Excellent book about Soviet strategies during the cold war by Mihai Pacepa a real insight into the workings of Communism.

It has been incredible to listen to a former spy chief revealing secrets of trade.

I will start by saying that I detest communism so I am not criticising the book for the views of the author.

I will say that the author routinely draws conclusions from thin air makes baseless claims and allusions, such as his suggestion that South Americans may have a gene which impacts their ability to learn from past events.

He routinely attributes 100 million deaths to the Soviet regime, most of that in peace time, sometimes even including WW2 civilian deaths in the total number. Though the death toll from communism was huge, this number is almost certainly an exaggeration that serves to discredit those who quote more realistic numbers.

He also briefly mentions the formation of the NHS while listing examples of failed nationalisations of industry which is laughable. He even went as far as to say that Clement Atlee was an undercover Marxist agent. He even makes a baseless claim that the democratic party in the usa seeks to nationalise industries on the scale that was seen with Atlee in the UK.

His arguments referring to earlier events, with which he had personal experience, seem to be rooted in fact. However as he discuses more recent events, his conclusions become increasingly based on "this looks kind of like what I've seen so it's a Russian conspiracy" and he even resorts to using fox news as a source. It also became clear that as he discussed more recent events, the amount of times he would actually back up his claims of Russian involvement became more and more sparse, constantly referring back to near irrelevant past examples or experiences.

I will also add that he is incredibly dismissive of almost all criticism of the USA, pinning the cause of essentially all anti-war feelings as Russian disinformation.

I made it to part 44 out of 48 and would not recommend this book for anyone who is looking for a good book about Russian meddling abroad as it presents the views of an incredibly biased man who draws primarily draws conclusions from personal experience and feelings, which become increasingly irrelevant for more recent events.

I have read/listened to approx. 35 nonfiction (and almost the same in fiction) books on WW2 and it's aftermath, and the opinion of the Pope's behavior during the war is almost never favorable. Imagine my surprise to find out what might have been going on behind the scenes. Only one of the examples of disinformation. Brought up to the present day the examples pile up. In the US we are so naïve in our own lives, we can't imagine paranoia on the scale of the soviet block, its a wonder that we are still here. Can you imagine what your friends would say if you tried to point out that this news story or that is a Russian conspiracy? Be vigilant, but not paranoid (McCarthy may have been right, but his behavior and his misuse of power was wrong). This book will change the way you think about our history. Google the author for more interesting information.
PS, never confuse crazy governments with the incredible citizens who are forced to live under them. When you meet them, remember what kind of world they live(d) in. Call the police and you may be calling the criminals themselves, imagine having not recourse to justice anywhere.

You will never see historical and current events the same way again.

Once you know it's a game, you can no longer be a participant.

The publisher is WorldNetDaily...

Interesting up til the point that authors started regurgitating wild speculations about 21st century US politics, the kind that otherwise only hail from the fringes of the right-wing. Lo and behold, the publisher is WND Books aka WorldNetDaily, the fringiest of the lunatic fringe, an outlet that in the years following this book’s publication has been linked to Russia’s ongoing disinformation and election interference campaigns. Not sure what that says about Ion Mihai Pacepa, he was in his 80s when this came out so it’s possible that he was just an old man whose name and story was manipulated by bad faith actors. Interestingly, his coauthor is a regular contributor to Epoch Times, the propaganda outlet of “new religion” group Falun Gong (they don’t believe in evolution and think aliens started taking over people’s minds, but they also hate communism and China which allows them to find allies on the far right like WND).

None of that is the fault of the narrator however, he did a fine job.

The word WOW doesn't begin to do this justice

This has to be the most enlightening book I've ever listened to in terms of understanding reality and the things the Communists have done over the years to warp the truth to deceive the world. I am so glad the author escaped, defected, and wrote this story.

It all makes sense now

More detailed info than I ever expected! Now the challenge is to convey it to others. We are all being led down a path that I, for one, don't want to go. Excellent read.

If you could sum up Disinformation in three words, what would they be?

the narrator was excellent - i liked the way he read me the story & i loved his different accents! so well written...so well told....a must read for every american because almost everything you see and hear is DISINFORMATION. it's one of the most eye opening books written+++++

now i watch the news from the prism of "IS THIS DISINFORMATION"?!! and most of the time it absolutely is.

just an excellent audiobook that i wish everyone would get :)

The best thing about the audiobook is the narration, which is decent.

The book is published by World Net Daily, an alt right, conspiracy spewing website. I would highly recommend you choose something else to read.

This book sheds really interesting insight and new perspective on numerous historical events, from anti-church disinformation campaigns to the shooting of JFK and the rise of anti-American Islam. My only major gripe was the author's analysis of Obama, where I thought he seemed to confuse campaign rhetoric with action. The points about revolution theology were valid, but he made too big a deal about a single picture of Che Guavara in a campaign office and some campaign rhetoric. Other than that, very interesting and well researched book.

A great book. A must listen to all

I found the book to be informative. A must read or I can say must listen. The KGB is really exposed here.

Living in the meme and soundbite media climate combined with insidious censorship, this is a must- read.