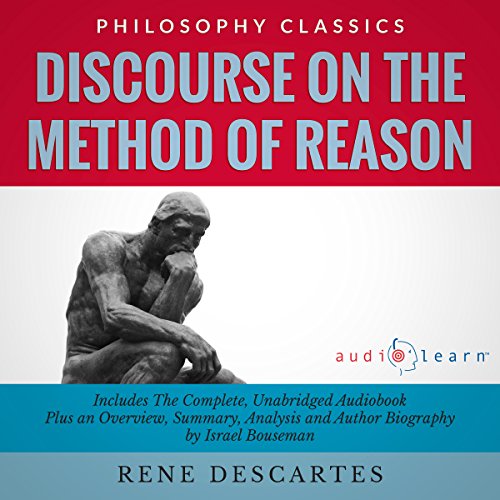 Discourse on the Method of Reason

By: Israel Bouseman,René Descartes
Narrated by: Bob Rundell
Try for £0.00

The course of modern philosophy has many contributors, but perhaps not as significant as Rene Descartes, whose work initiated the secular movement which now characterizes the entire field of Western philosophy. Cogito ergo sum. I think therefore I am. This was the singular truth which initiated the structure of thought built by Descartes. His work was the starting point for all of the philosophers which came after. He extended the use of reason and deduction into the natural sciences, and his work was the beginning of the climb out of the dark ages of faith and reasoning by authority. The Discourse on the Method of Reason was the first true work of skepticism, a foundation of doubt which allowed a critical re-examination of all that was previously held to be true. Descartes literally revolutionized both philosophy and mathematics, and this discourse provides the means by which he approached the tangle of contemporary thought and laid the foundation of rational understanding.

Includes: A brief background of the author and the work, overview, synopsis, and analysis historical context, criticisms, and social impact chapter-by-chapter summary, the full narration of the text. This audiobook is suitable for students of philosophy and for anyone interested in exploring Western philosophy and its origins.

What listeners say about Discourse on the Method of Reason

Discourse with a Noble Man of Past Ages

“...the perusal of all excellent books is, as it were, to interview with the noblest men of past ages, who have written them.”
― René Descartes, Discourse on Method

There are certain books that are hugely influential and fantastic reads. This one was hugely influential. In many ways modern science (and philosophy) owes a great deal to some of the frameworks, methods, and rationalities posited by Descartes in this book. Hell, even the idea of starting off skeptical and building from there owes a large debt to Descartes. It isn't, however, a perfect book. Some of his "proofs" of God and the immortality of the spirit are a bit shaky (like his understanding of the functioning of the heart). But those are quibbles, minor imperfections, in a work that probably deserves to stand next to classics such as: Darwin's The Origin of Species for biology, Newton's The Principia: Mathematical Principles of Natural Philosophy for science, and Julia Child's Mastering the Art of French Cooking for mainstreaming French cuisine.

I cook, therefore I eat.

When you reduce and clarify Descartes down, you are left with a lonely method of skimming off those things you can't prove, and a sticky relationship with God.

The Beginning of Clarity!

Right from the start, I have to give Descartes credit. How many of us actually stop to think about what we know? About why we know it and how certain that knowledge is? And we live in an era where you can look up anything with a search engine and the press of a few buttons. In Descartes’ era, knowledge was much harder to come by. Not impossible, by any means, and likely the quality of the written works in his time were on average higher than the average quality of the modern era. It took study and application to write a piece of literature. It wasn’t something that was entered into lightly. This made it all the more likely for those who read it to accept it without question. The writer was clearly an authority in the field, otherwise they wouldn’t have written it.

Another influence that Descartes was working against was a markedly provincial lifestyle. This was not as true in the 16th century as it would have been a few centuries before. The Crusades had taken people to new worlds and exposed them to new cultures and ways of thinking. Although they were violent and immoral in many ways, these religious conflicts led Europe into the Renaissance, introducing new understanding and clarity to thought. Descartes is a product of this expansion, and one of the few in this era who presented it in a form that others could clearly follow.

Descartes begins with doubt. This is something Bertrand Russell would have loved. Russell felt that the purpose of philosophy was to clarify and refine our thought, to allow us to distinguish between assumptions and certain knowledge. He and Descartes would have seen eye-to-eye about the purpose of their field, as Descartes is all about certainty. It is his central pillar, the ideal to which he aspired with all of his work. Certainly a lofty goal, and I have to admit he made headway in rooting out a number of the assumptions that characterized the thought of his era. At the same time, even his first and seemingly most unquestionable truth, “I think therefore I am,” contains assumptions which reflect his preconceptions.

Descartes shares his history and education, pointing out the flaws of the fields of studies he has encountered alongside their merits. Once again, I must give credit where credit’s due. It’s a monumental challenge to review one’s entire field of thought and edit out those things which are taken on faith and without evidence. In fact, when we get right down to it, we cannot know anything with absolute certainty except for tautologies or conclusions within closed systems. So, to a large degree, the efforts of all philosophers to arrive at solid conclusions about the external world is an endeavor destined to futility. Any conclusions we feel are certain are projections, rooted in our own beliefs and assumptions rather than any objective truth.

Despite this, Descartes laid out his precepts and the method he used to arrive at conclusions. Whether the conclusions themselves were correct or not, his method was a process of slow and steady gathering of knowledge and of laying out the path of his thought so others could follow and check his work. In essence, he laid the groundwork for the scientific method. And more than that, really. The scientific method is rooted in the assumption that there exists an objective universe, a world that exists independent of our beings or perceptions. It also assumes that this world behaves according to certain and regular rules. That, in essence, it behaves like a machine. The core assumption of science is that if the principles of this machine are sufficiently understood, then we will be able to predict and utilize these principles for our benefit.

Descartes was the mouthpiece for an entirely new paradigm. It’s easy for us to see the assumptions that he makes about the nature of the divine, because in the modern era these assumptions have been questioned. However, it is far more difficult for us to identify his assumptions about the nature of matter and physical reality. Our thought is still largely governed by this paradigm. The funny thing about a paradigm is that, from within it, certain conclusions seem clear and obvious. Descartes would have agreed with us, for example, that the shortest distance between any two points is a straight line. Except that we now know this to be only conditionally true. Quantum mechanics has expanded our understanding of existence and how we relate to it, calling even “certain and obvious truths” such as this into question.

This, I think is one of the greatest values and opportunities of this piece. By reading Descartes’ work, we can call into question all of his thought. We can see the ways in which his work was a huge leap forward from his contemporaries, and see clearly that despite this, it contains many shortcomings which new and fresh thought can rectify. Furthermore, this is a handling of his work that he would have not only appreciated, but applauded. In theory, anyway. He was a bit arrogant about his conclusions.

One of the things that I like best about this work is its section on the practical application of scepticism. Descartes says that in the pursuit of knowledge, it is best to call all things into question. But in practice, we have to have certain guidelines for our behavior, otherwise we will be indecisive, adrift. These guidelines are:
1. To follow the customs and laws of the society we live in. As a part of this, he expresses that he is opposed to any law that results in an abridgment of freedom. I can really get behind this, and wouldn’t mind if it was adhered to by modern lawmakers.
2. To be firm and resolute in our actions, rather than wavering back and forth. And if we’re wrong, we’ll find out soon enough. Solid and practical.
3. To seek self-mastery rather than fame or riches. Definitely more rewards in that one in the long run.
4. To look into different occupations and explore what might be fulfilling for him.

In the absence of “should’s” and “ought-to’s” I feel that these are some pretty solid guidelines for behavior. Not perfect, but enough to encourage expansion in a healthy and constructive way.

All in all, definitely a good work to hear, and with the potential to open new avenues of thought, and maybe call some old ones into question.

This is not the tretises

This is not a reading of the tretises. It is entirely an interpretation. Theres zero first source material

It was ok, average, short and sweet. Serves more of an introduction to people new on the subject of philosophy. Rene is defiantly a good place to start, and if the Lerner is in high school, even better. Altogether, it is nothing more then that, if you have a higher understanding of philosophy, then this is not for you.

One of the worst Narrator I've heard in 40 books.

This is a great version of the book if you want to sleep. The narrator's voice is a smear of white noise.

I don't know if you could fix this one. The material is, by its very nature, difficult to follow. Couple that with a monotone reader and it becomes unbearable. I made it half way through the book before giving up and buying the one narrated by James Adams.... Much better!

Not really the Narrator made it impossible to follow.