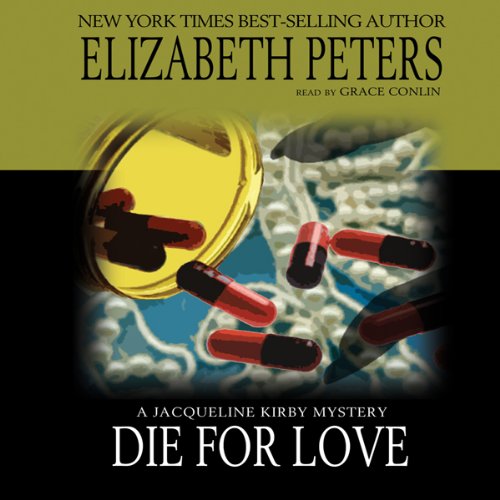 The annual Historical Romance Writers of the World convention in New York City is calling to Jacqueline Kirby, a Nebraska librarian who desperately desires some excitement. But all is not love and kisses at this august gathering of starry-eyed eccentrics and sentimental scribes. As far as Jacqueline is concerned, the sudden "natural" death of a gossip columnist seems anything but. And when she's approached by a popular genre star who fears for her own life, the resourceful Ms. Kirby quickly goes back to work...as a sleuth.

There's a sinister scenario being penned at this purple prose congregation. And when jealousy and passion are released from the boundaries of the printed page, the result can be murder.

"Die for Love" is a treat, with great narration supplied by Grace Conlin. Because I'm an Amelia Peabody fan, it took me a while to venture out into the other books by Elizabeth Peters, but I'm glad I did. "Die for Love" takes place at a Romance Writers' convention, and Peters taps into the high level of absurdity available in that situation. All of Peters' protagonists are gusty, self-assured women who don't hesitate to pursue whichever objective might capture their curiosity, and Jacqueline Kirby is no different. She is outrageous, outspoken, and delightful, and the cast of supporting characters are perfect foils for her pursuit of truth, justice, and a good meal (paid for by someone else).
I'm partial to Barbara Rosenblat's narrations of Elizabeth Peters' work, but Grace Conlin does a capable job, capturing Kirby's witticisms and sarcasm. I thoroughly enjoyed the listening experience and recommend it!

Audible, please get the Rosenblat version

Elizabeth Peters is at her funny, charming best -- but the narration is terribly disappointing, especially when so many of Peter's books are read by Barbara Rosenblat!

Audible needs to get the whole Kirby series with Barbara Rosenblat as narrator.

The librarian/detective lead character is so arrogant that it's very difficult to like her. She dismisses or demeans all the other characters including her boyfriend. So - the story itself was convoluted. I didn't enjoy it.

How can you go wrong with Ms. Peters writing, Grace Colin narrating, and Jacqueline Kirby as the "star"?
I don't know if it is the first JK novel by Ms Peters but this is the start of her career as a writer of romantic novels. It is clever and has a fine mystery in the midst of the wonder that is Jacqueline and her purse!! I enjoyed it!!

I have read this book twice and now listened on audible and it’s just not engaging. Especially compared to Elizabeth Peters other books. Just kind of boring and I didn’t care about the characters at all

I love Elizabeth Peters, and this is one of my favorites, but the delivery is really dull and lackluster.

oh I think I should read books for a living. I hate conlin. she is monotoned. you can't distinguish characters in a running conversation. characters voices constantly change. when will you stop using her or give us an alternative? I probably would have enjoyed the book more with another narrator. I only downloaded it because I loved naked once more, but of course Barbara rosenblatt narrated that.

Absurd, silly, and a lot of fun!

What happens when a lot of romance writers and wanna-be writers get together in New York? Lots of pink hearts everywhere, and a lot of cattiness. Jacqueline Kirby wants to get away from her dull librarian job in the mid-west, so uses the romance-writers convention as a tax-deductible excuse to hit the Big Apple. Along the way, she solves a murder, prevents another, and finds a new career! So absurd, you'll be laughing through the whole book!

Grace under fire is the order of the day when Jacqueline Kirby returns, this time to sort out the ills and the ill-matched of a writers' conference for romantic novels. She is her same predictably unpredictable self and manages to find the solution to this mystery with a twist. Peters' characters are quirky and satisfying and Conlin's narration, a great pleasure. She captures Jacqueline's nature with purring, yet brisk tones and gives the other voices individuality. It's a romp that races through cliches without becoming one. While not quite as unique as "The Murders of Richard the III", it remains a satisfying guilty pleasure and thorough enjoyment.

Jacqueline Kirby is a librarian who seems to know everything.
After reading "The Murders of Richard III" (in which she also has read everything), I was a little let down with Jacqueline, but this one is much better (though still boasts so many characters it almost rivals a Russian novel).
Jacqueline attends a Romance Writers convention. She discovers a college friend who's now a teacher attending the conference; Jean has been writing under the nom de plume of Valerie Vanderbilt and is terrified someone will blow her cover and she'll lose her teaching job. Another old friend is also on the scene -- Betsy Markham is picketing outside the convention -- because of the objectification of women in the romances. Jacqueline barely settles in before she offers to share her room with Sue, a stewardess and stalwart romance reader. When Sue meets Victor von Damm, who is really actor, Joe Kirby, fronting for some housewives writing the romances bearing his name, a romance blooms. The star of the show is gorgeous Valerie Valentine, whose books are so good the author could be writing literature. Laurie, an overly devoted fan who seems to have mental problems as well as physical ones, repels Valentine, but agent Hattie uses her as a slavishly devoted servant. Hattie is the puppet master. She takes an inordinate cut of Jean's earnings, has a contract with Joe that he's afraid to break, and even bosses Valentine.
Of course, there's a murder, Dubretta, a journalist who's tried for years to get the goods on Hattie thinks she finally has them. Dubretta dies under circumstances Jacqueline finds suspicious, and so does O'Brien, a police officer and long-term acquaintance of Dubretta's, but the death is ruled heart attack, so he has little leeway to investigate, although he is less than happy when Jacqueline and her friend James Whittier, a teacher at the college where Jacqueline is a librarian, step into the breach.
The dialog is great. I don't like Grace Conlin's reading of some of Elizabeth Peters' standalone books -- she sounds supercilious -- (and I downright hate her readings of Amelia Peabody, much preferring Barbara Rosenblat) but Conlin seems better suited to read smart-mouthed Jacqueline.