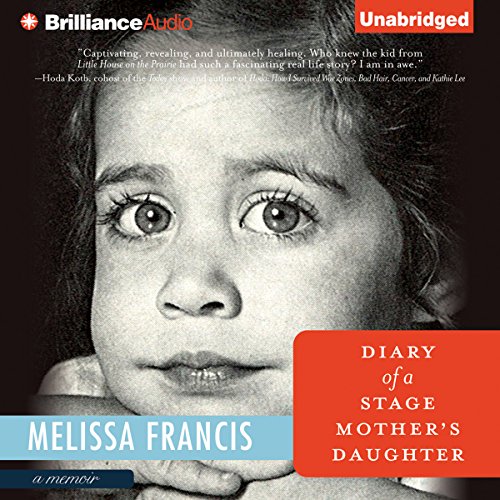 Diary of a Stage Mother's Daughter

Diary of a Stage Mother's Daughter

When Melissa Francis was eight years old, she won the role of lifetime: playing Cassandra Cooper Ingalls, the little girl who was adopted with her brother (played by young Jason Bateman) by the Ingalls family on the world’s most famous prime-time soap opera, Little House on the Prairie. Despite her age, she was already a veteran actress, living a charmed life, moving from one Hollywood set to the next. But behind the scenes, her success was fueled by the pride, pressure, and sometimes grinding cruelty of her stage mother.

While Melissa thrived under pressure, her older sister - who had tried her hand at acting and shrank from the limelight - was often ignored by their mother in a shadow of neglect and disappointment. Tiffany could do nothing to please her mother, but it wasn’t until after Melissa had graduated from Harvard University with a degree in economics, found love, and married that Tiffany’s personal problems culminated in a life-and-death crisis. When Melissa realized the role her mother continued to play in her sister’s downward spiral, she resolved to end the manic, abusive cycle once and for all.

Diary of a Stage Mother’s Daughter is a fascinating account of life as a child star in the 1980s, and also a disquieting tale of a family under the care of a highly neurotic, dangerously competitive "tiger mother". But perhaps most importantly, now that Melissa has two sons of her own, it’s a meditation on motherhood. She asks the questions so many of us ask ourselves: How hard should you push a child to succeed, and at what point does your help turn into harm?

Raised during the Little House years, is what initially made me buy this book - but once you get to about the second paragraph, you are grasped by the story - the characters and their feelings and can not put it down.

Opening scene moves you right into the writers shoes.......

Excellent use of descriptive adjectives - and thank you to Melissa Francis for sharing her private story - all the best to her on her many successes she obtained all by herself!

Amazing story of survival and accomplishment by a very talented child who became a very wise and talented woman. But, her journey was more painful for me than interesting. Melissa never makes you feel sorry for her. Rather, you feel stunned and angry for her. She handles her mother in a rather matter-of-fact way that is nonjudgemental, which is amazing, considering what mother did to Melissa and her sister, Tiffany. This nonjudgemental voice makes it possible for you to listen without the emotion of sorrow, but for me, I found myself getting angry. Mother was a bad person.

Would you be willing to try another book from Melissa Francis? Why or why not?

Was Diary of a Stage Mother's Daughter worth the listening time?

The first half of the book, regarding the authors childhood and insights into the movie business was very interesting, but after that, the author just sounded like a young person who never matured and wanted to blame her mother for everything. I kept wanting to say "good grief, get over it." Everyone's parents can be upsetting at times. The author had a lot less to put up with than a whole lot of other people who get on with their lives.
I was disappointed. It was a waist of my time and money!

If I were the author I would be really annoyed that the narrator made Melissa sound like a spoiled brat. I know the author wanted the mother to sound like the worst person on earth, but she succeeded in doing it to the author as well.

Could you see Diary of a Stage Mother's Daughter being made into a movie or a TV series? Who should the stars be?

Only if you stop it half way.

Beautifully written. From the very start of this book, you feel like you are there. The author is quite open. The way she expresses in detail what is going on between the members of her family is enlightening. The contradictions and complexities of stage mother behavior demonstrates how difficult it can be to deal with this type of situation.
Sadly, in the end, this behavior leads to heartbreak and tragedy.

After listening to Melissa last book I want listen

to the story behind Melissa childhood. if you want to learn how not to be a good mother this book is for you and then think God for good parents. I strongly believe Melissa is a great parent along with an excellent jounalist.

Great story. Compelling! Truly a page turner. Although tragic; Melissa's candor made it difficult to put this book down.

A narrator who knows what a vicious, bi-polar mother sounds like! I should have downloaded this book to read not to listen to.

What would have made Diary of a Stage Mother's Daughter better?

I kept waiting for Melissa to grow up and out of her spoiled tone, but she didn't. Instead, this is like a burn book against her mother, and really everyone (nobody is safe from her judgment). While I would have expected her to look back critically at her mother's behavior, with a sense of understanding, she instead judges her mother, her sister, her friends and neighbors, and basically everyone except her father. Wow, this is just such a spoiled narrator!! I am sure the actual actress went through more hardship than this, but the tone of the text is off-putting.

What could Melissa Francis have done to make this a more enjoyable book for you?

To improve this narrative, she could have told it from an adult perspective, offering -- at least at times-- a sense of how she, as an adult, understood who raised her and how hard they were working for her. The point of this book is that her mother was awful. She tells us about her mother's failings (even saying she wore the same shirt two days in a row or didn't clean their house enough so the rugs were worn...), but never reflects about her mother with real compassion or addresses her situation from a mature perspective. Her mother didn't meet her high expectations (and she had real, shocking, failings according to this book), but... wow, to write this book about her... that's really pretty awful. NOT because the book is scandalous or interesting... just petty, immature, and off-putting. I wish I'd spent my money elsewhere.

An Interesting Fly on the Wall...

I think just about every actor in Little House on the Prairie must have written their memoirs now and this was as good as the rest of them. I enjoyed listening to the book but this comes in the category of the less memorable kind of book that I remember very little about a few weeks after reading.