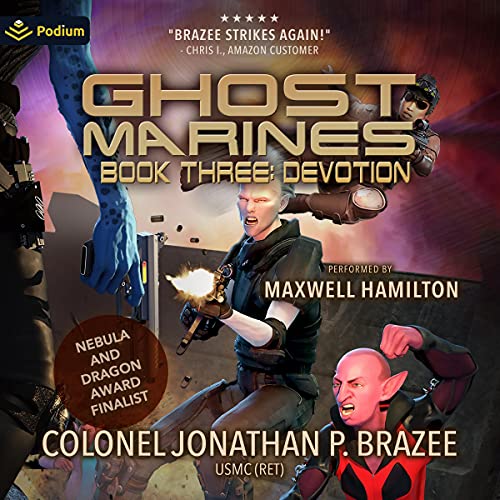 By: Jonathan P. Brazee
Narrated by: Maxwell Hamilton
Try for £0.00

Sergeant Leif a’Hope Hollow is the first of his people to earn the coveted title. He never knew how soon he and his fellow raiders would have to prove themselves on the field of battle.

After the failed coup to oust the emperor, the Novacks do not fade quietly into the background. They continue a low-grade insurgency, but in doing so, they open the door to other players that bring the entire empire to the brink of destruction.

Sergeant a’Hope Hollow must lead a ragtag group of fellow non-humans in an attempt to avert a catastrophe that can wipe out humans forever.

What listeners say about Devotion

Being a former Marine I enjoyed the many battles and places described. Semper Fi past, present and future

I love this series, and this book is just as good as I hoped it would be.

I would not recommend starting this book without reading the first two books in the series. While you could probably follow the main story fairly easily, there's a lot of very important context and story elements you would be missing out by starting here.

With that said, this book was great. It starts off with the various alien races becoming more and more ingrained into the imperial military and really becoming somewhat unified. It feels like a very real, natural progression from what we got with the first two books. The thing I loved about this book, is that while it continued the trend of showing the brotherhood that forms between all these soldiers in the military despite their many differences, it's so much more than just fighting. The previous books have all delved into the interspecies relations, politics, diplomacy, etc. as well, but this one goes even further into it, which I thought was a huge plus. I loved seeing the progression made in integrating the alien races into the predominantly human society, the choices they have to make, concessions and ramifications involved. I want more of it.

If you liked learning about the other alien races, their views of the humans, their situations within the empire, their loyalties, the politics, from any of the previous books, this book has more of that. The main character is far past the point of training, and so we get none of that here, which is a change from the previous books. The amount of action is roughly the same as in previous books and instead of the many scenes of training back when Leif first enlisted, we instead see how Lief handles the duties of being not only a much higher rank, but also a well known alien marine with followers. And my favorite parts were always when he has to deal with those things he's uncomfortable with, like diplomacy, leadership, and public speaking.

I really hope to see a fourth book, and I also hope to see even more of the type of content that this book delivered, of seeing the empire grow and to see aliens alongside humans as first class citizens.

The narration was great. Maxwell has done a great job with all the books and I was easily able to distinguish all the voices from each other.

Overall, I loved it and would highly recommend, but I would still suggest reading the books in order, just in case anyone who reads this is thinking about starting here.

It takes a universe.

This tale shows the dark side of prejudice and how it comes back to bite those who practice it.
Overall the narration was pretty spot on. Again this book is a good stand alone story. Still I personally feel that one should start with book one in the series then two to really into this book.

The story line is great Scifi Milfic, It moves at a good clip and I'd buy the next book... but! My guess is that the performance was done by someone without military background. The number of mispronounced technical and military terms was distracting.

the title is correct

I simply love to have this book since you on a world wind ride. And I definitely would recommend it to my friends.