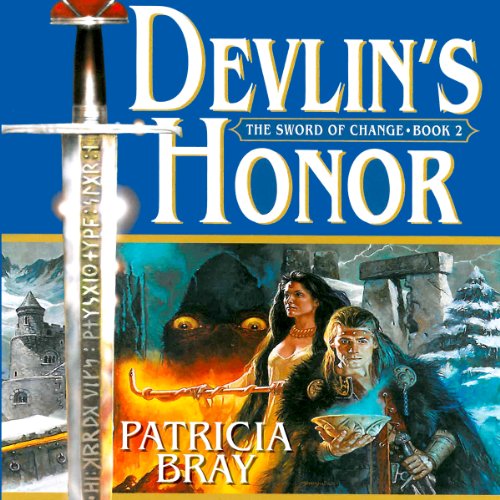 An action-packed fantasy, Devlin's Honor tells the story of Devlin, the chosen one, who battles his inner demons as he searches for the Sword of Light. The second book in the Swords of Change series transports listeners to a whole new realm, and Mirron Willis' performance deepens this experience. His baritone voice adds gravitas to Patricia Bray's words. He manages at least a dozen accents; Willis clearly enjoys playing the imaginative characters in this series. Most importantly, Willis captures the audiobook's otherworldly tone pitch perfectly.

Devlin of Duncaer is the Chosen One, champion of the Kingdom of Jorsk. A simple metalsmith and farmer turned warrior, he has become the most unlikely of heroes to the conquerors of his own people, the Caerfolk.

Yet there is a growing faction of Jorskians who believe that if he were truly anointed as Chosen One by the Gods, then the immortals would have given him the Sword of Light as proof of his calling.

Missing for generations, the sword is more myth than reality. But Devlin knows where to find it. Lost in battle after the Jorskians’ brutal massacre of Caerfolk, it has remained in Duncaer, a souvenir of one of the land’s darkest days.

Feeling more than ever a pawn of fate - and a plaything of the Gods who drive him - Devlin must return to the land of his birth, back to the people who have denounced him. For he is bound by an oath he has no choice but to obey...a promise he may have to die to keep.

What listeners say about Devlin's Honor

If you have read the other books this is a must read and fantastic! Worth every penny.